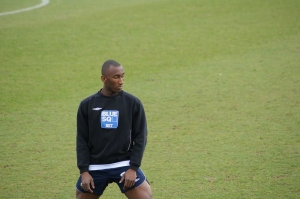 Another notable match in the Welsh Cup this weekend saw Obi Anoruo in action. He maintained his excellent scoring record, although he also missed an easy chance before he hit the net, but was also sent off.

Anoruo had been involved in an earlier incident which led to an opponent getting a red card: before a corner he appeared to be arguing with his marker-nothing physical was going on-and for some reason another defender came across, gripped him round the throat from behind, and was off!

It looked like things continued to be feisty afterwards, and when he took a swipe with his foot at an opponent as he lay on the floor, the ref showed a straight red-possibly a little harshly as he didn’t seem to make contact.

It’s never a good thing to get sent off, and it’s a shame he’ll now miss three games when we’ve sent him out to gain experience, but I must say I don’t mind seeing a young lad who is willing to stand up for himself either.

I suppose all experiences are valuable if you can absorb and analyse them. I suspect Obi will return ready to join the fray.