Two matches is a very small sample size so perhaps I should guard against getting carried away. However, our last two matches suggest that Jon Nolan has the capability to become that most rare of things – a successful loan signing. In fact, the current crop of loanees are shaping up quite well. James Caton looked sharp when he came on against Shrewsbury, and the horror expressed at the thought that Rhys Taylor’s dead leg might rule him out of the side is testimony to the immediate impression he’s made on the fans.

However, that’s not been the pattern in general over the last couple of years. We’ve accessed the loan market more frequently than ever before, but we haven’t played it well. This season we’ve loaned five players but have already thrown two back into the sea. (I think Joel Logan’s still with us, but I couldn’t swear to it!) and last season we brought in a whopping nine temporary signings. They were mostly unsuccessful at The Racecourse though,

Before then we didn’t loan players anywhere near as regularly. In the 2013-14 season Danny Livesey and Brad Reid were the only players who came in, we brought five in the season before and the campaign before that only Danny Alfei came in.

So, just how many of our loan signings have actually been worthwhile? 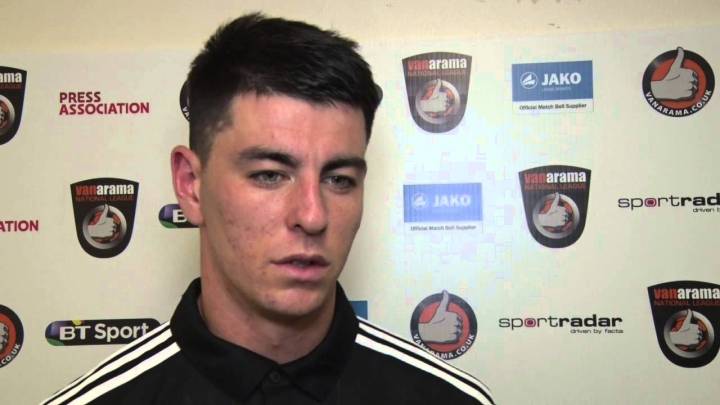 A big target man who looked like he might have something about him, Quigley didn’t quite manage to fulfil his potential. He had his big moment of course, scoring the equaliser in the derby against Tranmere, but his only sustained performance at The Racecourse this season came against us, when he worked diligently in isolation up front when he was on loan to Torquay. His strength never quite compensated for an awkward first touch, but he looked like he might develop with a bit more experience. 6/10

Ah. He looked good in pre-season, a right back who was able to overlap and interplay fluently and liked nipping in front of wingers to nick the ball off them. He was a robust tackler too, but he picked up an injury in a friendly and things went pear-shaped very quickly. He was a doubt for the first game of the season but was judged to be fit enough to start at Bromley. Let’s be charitable and assume he wasn’t ready: he had a horrible time, outstripped on the break and culpable for a goal when he sloppily lost the ball in his own half. He was subbed at half time and never appeared again. 2/10

An undoubted success between the sticks, the problem was the injuries he picked up.

It’s been tougher to bring quality loans in from higher divisions since we dropped down to the Conference; Premier League sides don’t see value in allowing players to drop to the fifth division as a final polish before stepping up to the first team squad. Bachmann was an exception, a fine keeper who was clearly too good for our level. He missed 25 matches though injury and 2 more through playing for the Austrian Under-21s. Kevin Wilkin might have ridden his luck a little more successfully if Bachmann had put in a whole season. 7/10

One day this guy will be a very good keeper. Some days, he was a very good keeper for us. The trouble is, a goalie this young is inevitably going to be inconsistent. In general, Flatt was a fine shot-stopper, but sadly the one game in which that strength deserted him was the biggest of the season. He could have done better for two of Stoke’s goals in the FA Cup – who knows what might have transpired if he’d lived up to his usual standards? However, he did us proud: we might have been victims of a giant-killing rather than nearly pull one off if he hadn’t been superb against Maidstone United, and his utterly magnificent display against Southport in the FA Trophy earned us a draw and was as good a goalkeeping display as I can recall by a Wrexham keeper. 7/10 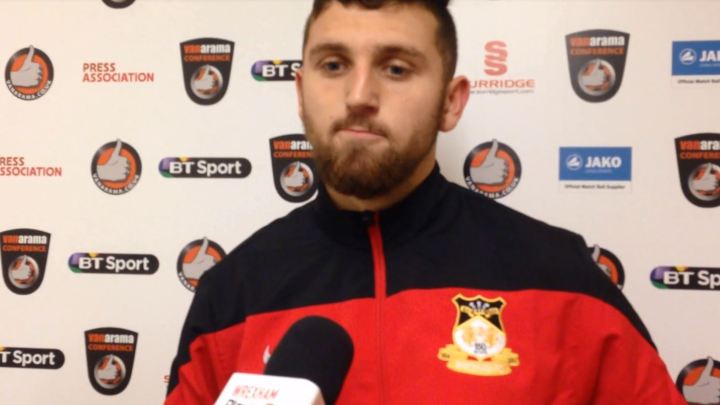 Sorry Nigel, I’m willing to risk being compared to a flightless bird over this. Pearson looked like he might turn out to be useful, but ultimately he wasn’t. He occasionally showed a propensity for whipping in a good cross and could look quite quick, but not often enough. Defensively, there was always a feeling that it was a little too easy for wide players to get crosses into the box from his side of the pitch, and his lack of stamina was alarming: in the first seven games after his arrival he was substituted in three, which is a fairly rare state of affairs for a full back, and not fit enough to be selected in two.

For me, however, the worst moment of his loan spell came at Stoke. As I mentioned before, Jon Flatt could have done better with two of the goals, but these things happen: not managing to pull off a save is part and parcel of being a keeper. What Pearson did in the build-up to Stoke’s first goal, on the other hand, was unforgivable. We’re close to a remarkable 1-0 win and digging in, so it’s surely a no-brainer to not go charging willy-nilly around the pitch and compromise the side’s shape, especially if you’re a full back? So why did Pearson decide to charge up the pitch to chase a backpass which he was never going to get close to, and keep going so he was a huge distance ahead of all his team mates? I’ve absolutely no idea: what I do know is that Connor Jennings had to funnel back to cover but our defence was horribly exposed and Stoke went up the other end and scored while Pearson was making his way back to the defensive position he never should have abandoned. I was furious at the time, and perhaps I wasn’t the only one: he never played for us again. 2/10

I’m not quite sure what to make of Finley. First impressions were that here was a player from an inferior league who wasn’t going to cope with the step up. Indeed, he spoke openly about how he found the adaptation process difficult – indeed, he was concerned that the Conference was an environment which made passing the ball around much more difficult than the League of Wales, which seemed surprising . Yet things improved. He never became the fluent passer he suggested he’d be, but he was certainly a diligent and disciplined midfielder who looked like he could offer more. I’d have been quite happy if had Gary Mills decided to have a look at him this season. 6/10

Was the failure to make the most of Hunt-or more to the point recognise what he could bring to the side-a contributory factor in Kevin Wilkin’s demise? Hunt had been our top scorer in the previous season, and had established himself as a valuably flexible player. His movement when we had the ball and discipline when we didn’t often made us look like a better side even when he wasn’t necessarily standing out on the ball. However, there was a strong suspicion that he wasn’t a Wilkin signing, and the manager certainly didn’t act like he’d wanted to bring Hunt in. He was available for 27 matches but only started 10. We won 4 of them, drew 3 and lost 3, but there were extenuating circumstances surrounding 2 of those losses – one was to Stoke in a game he played well in, and another was his one start at left back which wasn’t his best position. In those 27 games, Elliott Durrell started 23. Choices like those can cost a manager, and although you certainly couldn’t describe Hunt’s spell as a success, that wasn’t really his fault. 5/10 A success! A class act from the moment he danced over the mud in Halifax to set up Neil Ashton’s winner in the FA Trophy, Morris brought some quality on the flanks, scored a fine winner in a cross-border derby and got two at Torquay to send us to Wembley. When he left Carl Darlington had to abandon the width in our side and play a diamond. I think it’s fair to say that’s a fair definition of a successful loan spell. 7/10

Why did we bring him in? He arrived with a promising pedigree and looked lively off the bench on his debut at Chester. But he just wasn’t given a chance, which makes you wonder why he was brought in to begin with, In total he spent 31 minutes on the pitch, all off the bench, and was then sent back. Since he left us he has scored 12 goals in 34 league starts, which would extrapolate to 16 goals in a full 46 match season, suggesting he’s capable of offering good value from wide attacking areas. A disastrous loan spell, but it wasn’t his fault. 1/10

Thompson spent more time on the pitch than Holman, but somehow his loan spell feels more disappointing and bewildering. Undoubtedly the poster boy of last season’s failed approach to temporary signings, there seemed little need to draft in a wide attacking player when Wes York Durrell, Hunt, Connor Jennings and Nick Rushton were all fit and available for selection. Bizarrely, that seemed to be how Wilkin saw things, as Thompson spent his first two matches as an unused sub, and was left out of the squad completely for the next game. He finally got his chance when we rotated the side for the FA Trophy match at Southport, but he lasted just 45 anonymous minutes before pulling a muscle and bringing his time with us to an end. 1/10

The disconnection between our recruiting and selection policies last season is something worth examining (That’s a challenge, aspiring bloggers!) and the fact that we are still using the loan system to bulk out our squad rather than add to our starting eleven suggests it’s a deliberate club policy over and above the identity of our manager.

It’s interesting to compare the use of the loan system before and after this apparent shift happened though. Andy Morrell was generally criticised for his use of the transfer market and the suggestion that he might not be able to replenish the squad effectively was certainly expressed in some areas within the club while he was still caretaker. However, his use of the loan market looks a good deal more effective than what has happened since, with more hits than misses against his name.

Okay, he brought in Dele Adebola and Danny Alfei, neither of whom will go down in the club’s Hall of Fame. However, his other loans all have at least some merit and none could be considered an outright failure: Danny Livesey, Chris Maxwell, David Artell and Andy Bishop is a much shorter list. more effective list of players than the ones I’ve been rating out of ten!

3 thoughts on “Is Jon Nolan About to Break the Loan Jinx?”