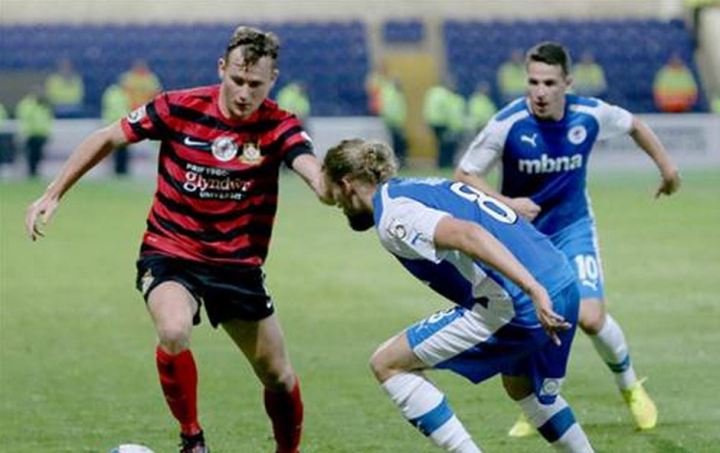 Prior to Saturday’s match Joe Clarke had missed just 16 minutes of the season, following a surprising late substitution in the Aldershot match. The Southport game saw him rested and he watched from the bench as we were overrun by the hosts, a magnificent performance from Jon Flatt being all that kept us in the FA Trophy. I’d be interested to see how we perform against the same opposition on Tuesday if Clarke returns to the side, because Saturday’s performance made me ask just how important he is to the side.

We certainly toiled in his absence, which was odd as both Jay Harris and Mark Carrington are proven performers in the heart of the pitch. It was the first time they’d played together as a pair, the only other time they’d both started in the centre of midfield being last season against Aldershot when they joined Clarke in a three to widespread acclaim: Clarke and Harris both scored and Carrington earned plaudits for his performance. The trio never lined up together again though: six games later Andy Morrell had gone and the 4-3-3 essentially went with him.

After being slightly the better side in a scrappy first fifteen minutes we faded badly at Haig Avenue, and lost complete control of the centre of the pitch. Was Clarke really missed so badly that his absence was a contributory factor? Certainly we could have done with his height and drive, both defensively and when we tried to take the game to Southport, and our ball retention was hugely disappointing: too often we survived an attack only to give the ball straight back to the opposition to allow them to start again. Perhaps Clarke’s presence might have disrupted what turned into a game of attack against defence for long stretches.

Having said that, Clarke was present, and impotent to prevent, the one performance this season which was worse than Saturday’s: the defeat at Braintree. That was a match which saw us defend stoutly but fail to take the game to our opponents for any sustained length of time. Clarke’s presence tends to stiffen up our resolve, but we need more than the addition of one layer to solve the issue of our lack of consistency this season.

One thought on “No Show Without Joe?”