Andy Morrell went through plenty of options up front, including himself. But did the forward line fire?

The leader of the line and a major loss once he was injured against Braintree, Wright kicked on from a decent first season with the club and added a cutting edge to his play.

Previously he’d appeared an honest tryer with a bit of pace once he got into his stride, but when the goals started to go in and his confidence grew, he became Morrell’s go-to guy up front: the one striker who looked more likely to take a chance than not.

There was a sense that he looked a little inhibited when Dele Adebola arrived into the forward line, but as the on loan striker regressed to the bench Wright appeared to spark into form again…until that fateful Braintree game. 8/10

A strange season in some ways, but by the end of it Ormerod had firmly established himself as crucial to Wrexham’s forward line.

Ormerod dazzled in the pre-season friendlies but struggled to find that form at the start of the season, waiting a long time for that first goal and finding players less able to link with him or utilise the space his movement created in competitive games. However, once he started scoring his form picked up and he was flying at the turn of the year when a freak injury during snow-enforced indoor training ruled him out for a stretch.

It took a while to regain his best form when he came back, but he finished the campaign well, putting in two fine performances in the play-off semi-finals and ooking the most threatening player on the pitch for an hour in the final. However, he then faded after missing a great chance to open the scoring, an unfortunate way to end a good season. 7/10 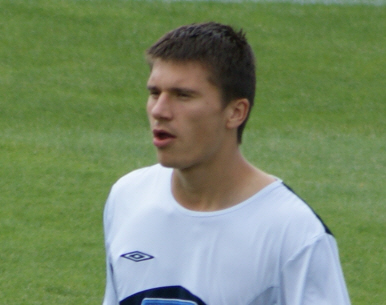 Another player whose campaign is difficult to evaluate. There have been times when he has flourished under Andy Morrell’s management, revelling in what appeared to be a considerable amount of faith shown in him by his manager. However, the campaign ended with him seeming to be out of favour, rarely starting, although he still made a crucial impact off the bench in the second leg of the play-off semi-final.

His form at the start of the season was his most consistent in the senior ranks though: he scored crucial goals, grabbed a couple of screamers (his long range effort against Nuneaton is the forgotten pearl of the season – check it out on the official site’s free player if you haven’t seen it) and provided a superb assist when the chips were down to earn a  point at Newport. There was still a sense by the end of the campaign that we’d not go everything out of him over the course of the season though: cue a debate over why that is. 6/10

With his age and managerial responsibilities, you couldn’t ask for any more from Morrell. His legs might not be wuite what they were, but his propensity for hard work is unchanged and he can still wear a centre back down. In fact it was perhaps a problem for Wrexham as the season came to a conclusion that he was the best forward at his disposal for fulfilling the role he often requires from a centre forward: working a centre back for an hour before unleashing pace at him off the bench.

He took chances too, and looked dangerous in big matches. What a shame he didn’t earn himself a swansong in the Football League. 6/10

The scorer of the first goal of the season, but the campaign petered out for him as it wore on. Clearly he has a lot of ability, and injuries have hampered his progression this season. His pace is a weapon and in early games he showed an ability to interchange slick, swift passes with players like Ormerod who were on the same wavelength. That feature of his game seemed to fade as the pitches deteriorated though, and he remains a player full of potential who will want to kick on next season. 6/10

A breakthrough season for the young striker who has been highly impressive in the League of Wales over the last two seasons and has made the transition from big fish in a small pond smoothly. Intelligent and confident, he chipped in with goals and assists and although he was selected less regularly as the season drew to a close he’ll be expected to push for a starting place from the outset next season. 7/10

The logic behind his acquisition was sound as he certainly looked to offer something the squad didn’t have, but Adebola turned out to be an peculiar player in many ways. He didn’t really do what it said on the tin, failing to do what his physique suggested would come naturally and rough up defenders or offer a threat in the air. However, he was capable of deft interplay when the likes of Ormerod and Thornton exchanged passes with him on the edge of the area, and looked terrific for the first twenty minutes aganst Ebbsfleet before he went off injured. He never recaptured that form, but at least he scored a wonderful winner at Lincoln to remember him by. 6/10

What a wonderful season for Reid. The buzz around him half way through the campaign was deafening as he scored the goals which fuelled the youth team’s league title run and his appearances for the first team at the end of the season showed real promise. Most encouragingly, he looked capable of learning: his substitute appearance against Kidderminster, while eye-catchingly lively, tended not to have much end product as he accelerated in on the diagonal, making the type of run which was effective against Under-19 defences, only to find he’d over run the ball and lose out against more experienced defenders.

Three days later he made another early sub appearance against Braintree and appeared to have worked things out: his running was more effective and he was a constant threat, denied a first senior goal only by a brilliant goal line clearance. The following Saturday he was our most threatening player after coming on at Mansfield. One to watch next season, undoubtedly. 7/10