It’s wonderful to see Wrexham rediscovering our FA Cup form and reminding us all of the remarkable pedigree we’ve enjoyed in this competition.

When we drew at Harrogate in this season’s qualifying round, we set a club record for the most games without a win in the FA Cup. Since then we’ve rediscovered our winning ways, and now approach an opportunity to add a cup upset to the long list of surprises we’ve already sprung in the world’s oldest tournament.

Throw in three runs to the quarter-finals, and we’ve a remarkable past in the FA Cup. When it comes to selecting a Wrexham dream team in the competition, there’s a lot of serious contenders to consider.

In goal the decision comes down to two players who have remarkably similar records. Both Welsh internationals, they each played in an FA Cup quarter final for Wrexham, and each made 22 appearances for the club in the competition, more than any other keeper. Brian Lloyd played at Burnley in 1974, and Andy Marriott lined up at Chesterfield in 1997, and both played major roles in those memorable cup runs. With an impressive ten clean sheets to his credit, I’m going to give Lloyd the nod. 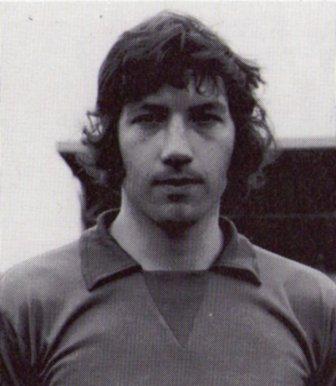 It’s tempting to put Joey Jones in as a full back. He did play in an FA Cup final after all, albeit for Liverpool and not us, and is twelfth on the list of all-time appearances in the competition for Wrexham. However, there are two other full backs who played more than him in the FA Cup, so I’m going for Mickey Evans and Phil Hardy.

Hardy never scored in the FA Cup, which is no surprise as he famously almost never scored at all in his Wrexham career. Evans got one FA Cup, but it was an important as it earned a 1-0 win at Hartlepool which set us up for a giant-killing in January 1970.

That match saw us triumph 2-1 away at Second Division Norwich City, and the scorer of the opening goal, Eddie May, is in my eleven at centre back. Both he and Evans would go on to feature in our run to the last eight in 1974.

I’m going to delve deep into history for the final member of my back four. Llew Davies’s appearances for Wrexham were spread over twenty years, ending in 1920, a year before we entered the Football League. He might not have got far in the competition, as we only reached the first round once in that period, but he played 43 FA Cup games, the second most for Wrexham.

In the centre of midfield, Mel Sutton deserves a slot. He is one of three players to appear for Wrexham in more than one FA Cup quarter final, having started in both 1974 and 1978, and made forty appearances in competition. Only two players have appeared more in the FA Cup for us.

To clinch the deal, in his only season as manager he pulled off the forgotten upset in our great history of giant-killings, beating Brian Clough’s recent European Champions, Nottingham Forest, 3-1 at the City Ground.

Alongside him has to be Arfon Griffiths. He has played more games in the FA Cup than any other Wrexham player, lining up 44 times and scoring 5 goals. He played in the 1978 quarter final at Burnley, and was player-manager when we got to the last eight again four years later, although he didn’t play against Arsenal.

Also in midfield is Mickey Thomas. He scored that famous free kick against Arsenal in 1992, of course, and also played in the 1974 and 1978 quarter finals, coming off the bench at Burnley and starting four years later. In total he made 28 appearances in the cup for us, scoring four goals. 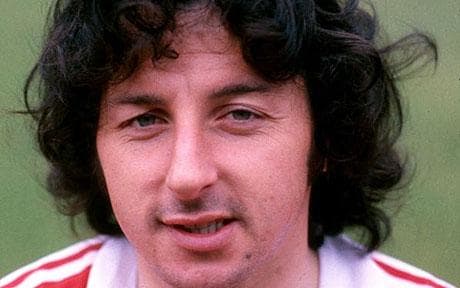 On the left wing, it simply has to be Karl Connolly. King Karl’s scoring record is superb in the FA Cup, despite playing many of his games on the flank rather than up front. In thirty eight games he hit the net sixteen times, the second highest total by a Wrexham player, and mixed in amongst those goals are some significant strikes.

His sensational long range goal at Chester in 1997, one of two he managed in a memorable victory, stands out of course. Those goals came the season after he chipped in with the final goal in the 5th round victory at Birmingham City to clinch a quarter-final place, and in 1999 he would put three past Scunthorpe, our most recent hat trick in the FA Cup.

The forward select themselves. Dixie McNeil’s famous scoring exploits in the cup aren’t limited to his famous run of 1977-8, when he became the first player to score in each of the first six rounds, a remarkable streak of nine consecutive games, including replays. He went on to score twenty-two goals in twenty five FA Cup appearances, one of which came off the bench after he’d retired! By some distance, he’s our highest ever scorer in the competition. 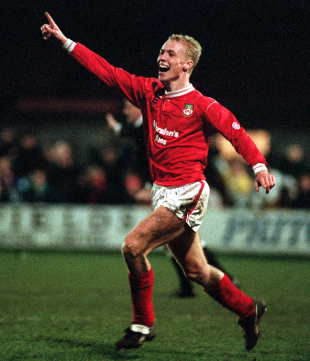 Alongside him in attack is Steve Watkin, and there’s more to him than Arsenal! Quite apart from scoring the winning goal in perhaps the greatest upset the competition has ever seen, he was a consistent scorer in the FA Cup, netting twelve goals in sixteen starts to lie third overall in the list of all-time scorers for Wrexham. He was prominent in the run to the quarter-finals in 1997, and it’s often forgotten that we would have gone out in the second round if it wasn’t for him.

His 89th minute equaliser at home to Scunthorpe United rescued the tie and earned a replay, which he decided when he kept his cool to slot home a penalty six minutes from the end of extra time. 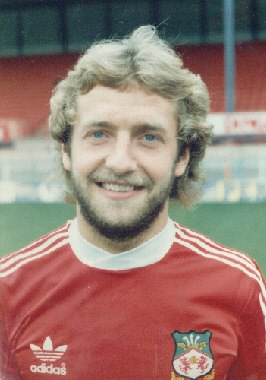 There are some fine players putting their case for a place on the bench. Graham Whittle is the third player to have featured in two FA Cup quarter finals for us, and our fourth highest scorer in the competition. Tommy Bamford and Bobby Shinton each have ten goals and complete our top five scorers.

Bryan Hughes’ seven goals from thirteen midfield starts, and his key role in the 1998 run, bring him into contention, and I feel guilty to have overlooked Gareth Davies, who made 40 FA Cup appearances in fourteen years of service. Two appearances behind him is a contemporary of Llew Davies, Ernie Huffadine.

So having selected a team, who would we want to manage them? The first thing to note is that we didn’t have a manager for our first games in the competition. In the early days of organised football, teams would be selected by a committee, so we didn’t appoint a manager until they came into vogue, with Charlie Hewitt taking the reins in October 1924, by which time we’d already been in the Football League for three years. Hewitt has a very consistent record in the FA Cup: played two, lost two! Clearly this new-fangled manager idea wasn’t going to catch on!

But we need a manager, so who will it be? If it’s wins you’re after, you’re going to be rather surprised by the answer!

Kevin Wilkin has the best FA Cup win percentage of any manager in our history, having won 60% of his games during his one campaign as we reached a third round tie with Stoke City.

Just behind him is Jack Baines, who managed the club between 1929 and 1931 and triumphed in five of his nine matches. He was the boss when we pulled off a home win over West Brom, who were then challenging for promotion from Division Two, in what was our greatest giant-killing act at the time.

If you want more sustained success, Andy Morrell’s win percentage of 55% is the best amongst managers who were in charge for ten or more games, and 3% behind him is John Neal.

Neal is the man to turn to if we’re drawn at home. He won his first four home ties, and was unbeaten in eleven games at The Racecourse, winning eight. He even got revenge for his predecessor, Alvan Williams, by beating Bradford City 5-1, three years after they’d beaten us 7-1 in Williams’ only match in charge in the competition!

If you want a manager who’s hard to beat, then one name stands head and shoulders above the rest. Arfon Griffiths only lost 4 of his 21 matches, which is impressive when you consider that only the competition winners avoid defeat each season, so that figure is inevitably inflated.

Furthermore, under Griffiths we were only knocked out by top division teams: Arsenal, Spurs, Wolves and Everton.

With that impressive record, I’ll make Griffiths player-manager. Inspired by him, if we could get this side together at their peak, I suspect they’d give Newport County a lot to think about!