Wrexham need to turn things around tomorrow. Last Saturday’s defeat at Southport wasn’t just the first time they’ve done the double over us since 1962. It was also the first time we’ve lost three consecutive matches since September 2013, when Chester, Lincoln and Nuneaton all beat us 2-0. Should we be defeated tomorrow it would be our worst run of consecutive losses since March 2009 as Dean Saunders’ first season as manager petered out, with Oxford, Altrincham, Kettering and Ebbsfleet all beating us 1-0.


Woking will not make things easy for us. Last season they managed their first victory at The Racecourse at their fourth attempt. We met them in August and fell behind to a magnificent strike from Scott Rendell. Louis Moult snatched an equaliser before the break and we seemed to have gained a grip on the match, but Dean Morgan struck in the second half to clinch victory for The Cards.

However, we gained revenge in an emphatic manner just two months later. We drew them at The Racecourse in the first round of the FA Cup and pulled them apart in a spectacular first half performance. Neil Ashton opened the scoring, netting the rebound after his nineteenth minute penalty was saved, before our front men earned just reward for their efforts.

Wes York and Andy Bishop had combined superbly and they both helped themselves to a goal as we cantered to a decisive 3-0 lead before the break. That would turn out to be the final score as we soft pedalled our way through the second half, making it our best result in this fixture. 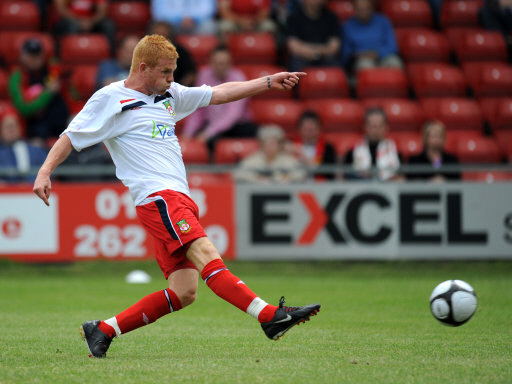 When Woking first came to North Wales, in December 2008, they returned south with a point after a 1-1 draw despite Marc Williams opening the score with his eighth goal in ten games.

Their next two visits each ended in defeat, though. On the opening day of the 2012-13 season we enjoyed a comfortable victory over The Cards. Rob Ogleby opened the scoring and Dean Keates grabbed another just before the break. The visitors remained in the game until the seventy fourth minute when a typically towering Mark Creighton header clinched a 3-1 win.


The following season we won by a two goal margin again, although we had to wait a long time before the points were secured. Keates struck again to give us the lead half way through the first half, but we didn’t get a second until the final minute, when Joe Clarke drifted in from the flank to score a fine goal.

Overall, in ten games both home and away we’ve won four and lost three, scoring in all but one of those matches. Avoiding defeat would mean we’re enjoying our longest unbeaten run against Woking.