It looks like James Gray has unwittingly sparked one of the more unexpected debates at the start of this season.

I can’t say it occurred to me to question his role in the current side until it was publicly doubted, and to be honest I can’t see why a perceived lack of goals is an issue. After all, he has a strike rate of a goal every three games at the moment, which would extrapolate to an impressive 15 league goals if maintained all season, and furthermore he’s been unlucky it’s not twice that total.

As has been rightly pointed out on Red Passion, he’s had two goals disallowed by tight decisions. In the process of editing the Wrexham PlayerHD videos, I’ve looked at the them both and come to the conclusion that, while they were both close calls, both ought to have been allowed to stand: against Aldershot he looked onside when the cross he headed home was played; last Saturday it really doesn’t look like the ball had crossed the line before Javan Vidal crossed for him.

That’s two classic six-yard box striker’s finishes unluckily chalked off, and you can see when you go through our GoPro footage of games how hungry he is in the box: constantly attacks the goalmouth when the ball is wide and his body language when a chance goes begging or he doesn’t receive a pass is frustration personified. Gray shapes up like a striker on the verge of a scoring run.

But anyone who thinks the individual is what matters in football hasn’t really been paying attention. A player might provide a moment of genius, admittedly, but it”s their place in the unit which actually matters.

All teams are a collective, and successful ones require a pattern of play, Gary Mills’ sides more than most. As proof, look at the difference in the Wrexham team last season when Carl Darlington brought purpose to a group of players who had ability but lacked structure.

Consider Gray’s performances this season in that context and it’s hard to fault him. He’s part of an attacking unit which is clearly delivering. Ten of our fourteen goals so far this season have come from the front three positions. If 71% of your goals emanate from your forwards, then your attack must be functioning, mustn’t it?

Okay, Gray has scored less than the men either side of him, and conventional wisdom argues that the central striker carries the main goal scoring burden, but that’s an argument which quite simply ignores the history and evolution of football. Try telling Cristiano Ronaldo or Thierry Henry that the guy in the centre is the main man!

Indeed, you need only to look at the successful Wrexham side of the 1990s to find an example. Steve Watkin scored his fair share of goals, but was outshone statistically by Gary Bennett. Did that make his outstanding hold-up play and ability to bring others into the game redundant? And would Bennett have prospered so spectacularly without him?

I would accept that the man Gray replaced, Louis Moult, was more of an all-round striker, happier dropping and facing goal, while roughly Gray’s equal with his back to goal and therefore liable to pose a threat in a greater range of areas on the pitch.

However, two conditions scream out if we are going to make that comparison. The first one is merely a matter of decency and context: comparisons are odious. Obviously Moult was going to be hard to replace because he was too good for the Conference – indeed, I’d argue he was comfortably the best striker in the league last season.

Secondly, would Moult have been such a good fit for the way this team is set up? The way the pieces have slotted into place as the season has developed has been fascinating: the front three has an unorthodox lop-sided look with Wes York a traditional wide greyhound on the right and Dom Vose playing an unusual wide play-making role on the left.

Vose likes to drop deep to link play up, and although York wants to take men on high up the pitch, out of necessity he often receives the ball deep and drives at his full back from way out. It seems to me that the balance up front requires a striker who is going to stay up at the sharp end and work the back four, not least because an advanced forward forces them back, making the pitch bigger and creating space for York and Vose to break into.

That isn’t Moult’s natural game – he’d want to drop off and join in more, so would we have the pleasing attacking fluency we’re enjoying at the moment, I wonder, if he was still at the club.?

My Wrexham PlayerHD co-commentator Alex Taylor hit the nail on the head in a pre-season broadcast when he suggested that Gray’s style is reminiscent of Andy Morrell. The main attributes Gray brings to the team are exactly those Morrell provided – his energy and movement wore defenders down, opened up the space between defence and midfield, and created opportunities for others. 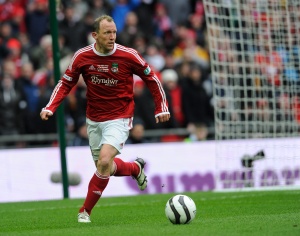 I recall a match at Bath with illustrated this perfectly. Morrell, Danny Wright and Jake Speight ground the back four down with 65 minutes of tireless work, then Dean Saunders brought on Mathias Pogba and Adrian Cieslewicz for the latter duo, and each provided assists as their fresh legs profited from the hard work which had already been done. Is it a coincidence that Kayden Jackson and Adam Smith look similarly lively off the bench? Obviously a big part of that is their own performance levels, but Gray has softened defenders up nicely by the time they come on.

For what it’s worth, I thought yesterday’s match was Gray’s best in a Wrexham shirt so far: an exemplification of the front-running qualities which wear centre backs down.

Ask a central defender what he doesn’t want the man he’s marking to do: drag him around into areas he doesn’t want to be, or force him to make constant decisions about whether to pass him on to a fellow marker will be high up his list.

Ask Graham Hutchinson, the centre back Halifax withdrew at half time, if he enjoyed chasing his tail for forty five minutes before being put out of his misery.

To return to my earlier point, centre forwards don’t have to score goals to be invaluable. The 1998 World Cup winning side featured a centre forward who was widely derided for his perceived ungainliness and lack of goal threat: Stéphane Guivarc’h was a big, strong target man who offered none of the fleet-footedness we expect from a top international striker. But he occupied the central defenders, retained the ball well and created the conditions in which others could flourish, including a certain attacking midfielder who played an incredibly effective role drifting around from a wide starting position. If James Gray is Stéphane Guivarc’h, allowing Dom Vose to be Zinedine Zidane, I reckon his place in the team is crucial.