It is a truth universally acknowledged that a team must be within reach of the play-offs when Ant and Dec announce the winner of “I’m a Celebrity Get Me Out Of Here” in order to have a chance of promotion at the end of the season.

Well, Wrexham have managed that feat, and now must find a way to kick on and consolidate. At the moment we stand a mere seven points outside the top five despite enduring a long run without a league win through October and November, which shows just how attainable a spot in the play-offs is this season. The top half of the table is so congested, with everyone chipping points off each other, that a run of form will easily get us where we want to be.

But I still experience a sense of frustration when I look at the table, despite the encouraging fact that we’ve been able to stick so close to the top of it without finding consistent form. That frustration is derived from the fact that we’d have considerably more points were it not for the erratic refereeing you come across at this level. 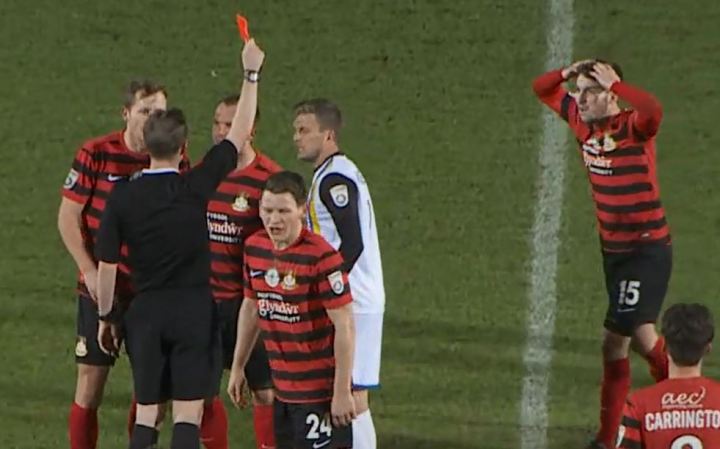 Louis Moult’s red card against Altrincham was ridiculous, and swiftly overturned. Robbie Evans’ dismissal against Bristol Rovers was just as ludicrous, but tomorrow he’ll be serving the second game in a three-match suspension as the F.A.W. must have felt it would look a little suspicious if they found in our favour again.

There’s no doubt that if Moult hadn’t been sent off then we’d have beaten Altrincham. Frankly, it’s a long time since I’d felt more certainly that the points were in the bag than just before half time in that match. We were 2-0 up against ten men and threatening to run riot. Moult’s absurd dismissal changed everything and we ended up losing.

Evans’ sending off was equally harsh and equally costly. We were looking at a second half hammering away at a side with an outfield player in goal and, having developed a domination of the first half as it went on, I’m sure we’d have won that one too. That’s five points taken away from us. Overturning a suspension isn’t going to claw them back for us, and that’s why I get frustrated when I look at the table. Add five points onto our total and we’re virtually in the top five already, and I haven’t even begun to consider the consequences of Mark Carrington’s dismissal at Bristol Rovers last September.

Word has it that soon we’ll be brought under the F.A.’s disciplinary jurisdiction. There’s a groundswell of opinion which argues we receive an unfair advantage by having our red card appeals assessed by the F.A.W. while our opponents go directly to the F.A. Certainly that was how Kidderminster felt when David Artell had a sending-off overturned and scored in a play-off semi-final he initially was due to miss.

If that’s the case we might lose our protection against the bizarre decision-making of Conference referees, which would be a worrying development. Their inconsistencies have already cost us dear this season.

One thought on “Counting the Cost of Wrexham’s Red Cards”