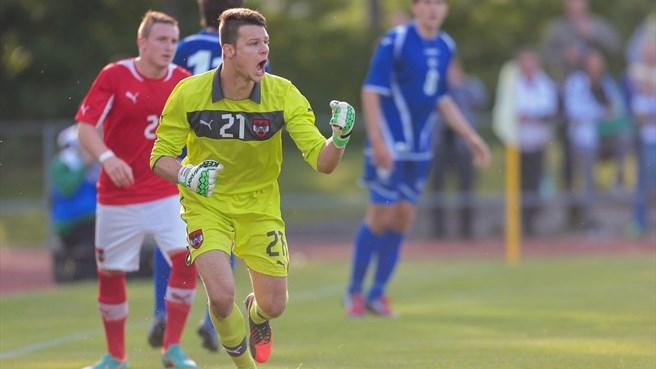 Kevin Wilkin has two keepers who look like they can make a contribution to a promotion push, and an interesting balancing act to perform.

Daniel Bachmann made an impressive debut at Dartford. The young Austrian’s kicking was a matter for concern, and British football fans are fixated with how far a keeper can plant the ball down the pitch, so many in the away end had their opinions coloured by that.

I’m not going to pretend his kicking was good: he tried to plant some kicks onto wide men’s heads but sent the ball sailing way over their heads, deep into the stand, miscued a couple out of his hands which he tried to hit them flat to give Louis Moult a chance against Mat Mitchell-King, and at the end of the first half had his one genuinely hairy moment when he looked to over-compensate by making sure he got distance with a side-footed kick which picked out the Dartford left back Green on the half way line, who had a clear run to the edge of the box.

However, try to fight the temptation to let his kicking colour your opinion: he looks like he might be the real deal when it comes to actually repelling the opposition. Admittedly, he didn’t actually have too much to deal with in terms of shots on target, but he was extremely confident coming off his line to claim crosses, fast off the mark when balls were played in the channels, and made three excellent punches under his bar when Dartford’s big men were up for set pieces and bearing down on him. He’s young, and we found to our cost when Dean Saunders was in charge that plenty of young lads come down from the Premiership and show genuine class, but find it hard to sustain over the period of a loan spell. But Bachmann certainly has something.

And then there’s Andy Coughlin. His confidence will have to be managed carefully, as it can’t feel good to lose his place like this when no doubt he’s spent the Summer expecting to be given the chance to build on his breakthrough season. However, he received an unexpected early chance to re-establish himself when Bachmann fell victim to a worrying specialism in getting kicked in the head. He kept our first clean sheet in five games and although he didn’t have too much to do, he made a sharp save from a blistering free kick and fulfilled the cliché of being switched on when needed in a quiet match.

Coughlin, and the way he is perceived by the supporters, is a big deal to me. A little knowledge is a dangerous thing, and I have a little knowledge about goalkeeping, and even less ability, having played in the position myself for a number of years, so this sort of goalkeeping debate gets me going.

Whenever I’m tempted to venture my opinion on the subject of playing between the posts I feel I have to start with a potted version of My Great Theory About Goalkeeping (c M Griffiths 1992). It runs like this: only actual goalkeepers fully understand the role properly, and there are very few ex-keepers out there, which is why so much nonsense is spouted on the subject. It’s also why managers, who are very rarely goalies, make bad decisions on their Number Ones, and why commentators (who frankly rarely come across as having even set foot on to pitch – Jonathan Pearce anyone?) go on about “a good height for a goalie”, “one for the cameras” and generally see punching the ball as a suspicious foreign affectation. It’s also why a certain Cameroonian has such a devoted following in certain quarters.

My keeper-snobbery is based on a moderate goalkeeping spell back in the mists of times (I was allowed to pick up back passes kids! And my only booking was for rolling my sleeves up because no keeper was allowed to have short sleeves then! Incredible it wasn’t also obligatory to wear a turtle neck and flat cap and smoke a pipe, really! Funnily enough, I wasn’t booked for chasing a referee to the halfway line with most of my team clinging on, trying to haul me back. Probably because it was later discovered that he was in the pocket of the other side and the game had to be replayed.)

It doesn’t often rear its head apart from a regular desire to tut and turn into a grumpy old man when “good shot-stopper” is used as a euphemism for “refuses to take responsibility for crosses”. (By the way, I must confess that, in this sense, I was a “good shot-stopper”, second in my refusal to help out my centre backs only to another short, chubby goalie: Kevin Dearden.)

However, I’ve got to break cover and have a strop because Coughlin has received some very unmerited stick. Indeed, he gets some remarkably virulent criticism online, and I hope he doesn’t see it. I certainly hope that, if he does, he doesn’t take it seriously, because it’s absolute rubbish.

Quite what grounds one would have for knocking Coughlin is beyond me. In his first season he looked wet behind the ears and when pressed into service he didn’t look ready. But the decision to give him a contract for last season was vindicated spectacularly. He still isn’t the finished article, I admit, but he took the opportunity presented to him by Jos Mayebi’s constant gaffes and was clearly up to the task.

Why he attracts such opprobrium is beyond me. Perhaps he doesn’t quite dominate in the air as you’d like a huge keeper to do, but he’s no coward and certainly doesn’t hide on his line. He doesn’t come flying out for everything, but I rarely feel he’s stayed back when he shouldn’t have: the key thing here is the relationship with his centre backs, and they don’t seem to look confused by him.

An example of a keeper who didn’t get this right for those of you of a similar vintage to me is Mark Cartwright. I had a soft spot for him because he was bold and not scared to take responsibility when the ball was in the air (and because he made the sale of tickets for our FA Cup tie at Old Trafford possible by smashing down the door of the secure room they were locked in when it was discovered the key had been lost as fans queued across the car park!)

The problem was, his defenders didn’t know if he was coming or not. We never actually conceded a goal as a result of an ill-advised dash off the line as if you’re big or loud enough opposing players tend to get out of the way when you plough through them. There were plenty of spilled crosses, but none were capitalised upon. His one real disaster was at Oldham, where he fumbled two shots in. However, his overly-bold decision-making spread panic around defenders and fans alike, and it was right that after one full season as our number one he made a fresh start at Shrewsbury, where he did well enough.

Coughlin isn’t guilty of that. Obviously defenders, given a choice, would prefer a keeper who comes for absolutely everything and makes it stick: no doubt that was the factor which influenced Wilkin most when giving Bachmann the nod at the start of the season. But defenders would rather know where they stand than not be sure what’s going on behind them. You know where you stand with Coughlin and he hasn’t let us down.

So Wilkin has the luxury of two good young keepers competing for one spot. January is already feeling like a massive month for us, as that’s when Bachmann’s loan expires. Wilkin’s success in keeping him beyond that date, or keeping Coughlin positive, could be a decisive factor in how our season develops.