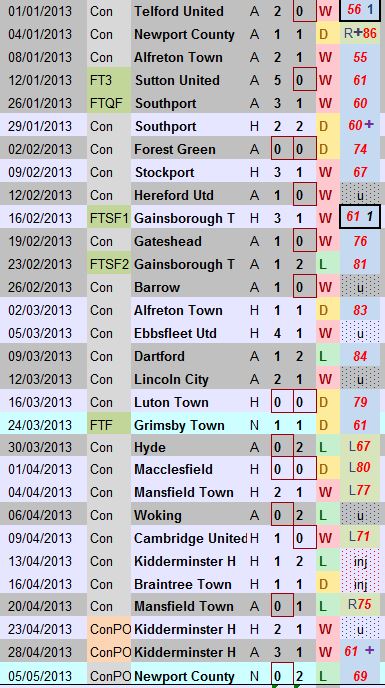 I started this article thinking I had stumbled on to statistician gold and found the reason why Wrexham’s season has been so – dare I say average? During my visits to the Racecourse this season I have found myself urging the boys in red to “SHOOT” more often, often frustrated by plenty of pretty possession but a seeming unwillingness to go for goal. While I stand by my thoughts that the Dragons could indeed take shots at goal more frequently (and perhaps hit the target a bit more often when they do), my fascination with statistics revealed that perhaps the season isn’t quite as disastrous as many have felt it to be. Yes, it’s been poor compared to the general excellence of the past 3 seasons but with players lost and budget restrictions, perhaps the team this season is doing the best it can under the circumstances?

Football is a fairly simple game. When you are not near the top it’s usually because you haven’t been playing well enough, conceding too many goals and not scoring enough. Like I said very simple, because all of those thing apply to Wrexham this season but let’s start looking at the stats – they make very interesting reading.

The Conference Premier League table tells us that Wrexham are (at the time of writing) in 13th position after 27 games, with 10 wins, 11 defeats and 6 draws delivering a total of 36 points. There are 8 points between Wrexham and the Play Off positions and 12 points separating them from the relegation spots – so pretty much as mid table as it gets.

This next stat is perhaps one of the more telling ones – The Reds have had more than 50% of possession in a game on 16 occasions but have only converted 9 of those into victories. On the flip side, Wrexham’s opponents have only dominated possession on 7 occasions but 5 of those teams converted them into victories. In fact, only the 5-2 victory at Hyde resulted in a Wrexham win when their opponents had the larger share of possession.

There has been a lot of talk about Wrexham’s admittedly poor disciplinary record this season but let’s have a closer look. In 27 games the Dragons have amassed 46 yellows and 6 reds which you might say is pretty steep but in those same matches, opposing teams have amassed 43 yellows and 4 reds. Not an awful lot of difference then.

How badly has Wrexham’s disciplinary record cost them this season? Considering the furore, perhaps not as dreadful as you might think. In the 3 games following each of the 4 occasions when Wrexham have been reduced to 10 or less men (so that’s 12 games in total – we haven’t had any games since Brett Ormerod’s red against Halifax) there have been 4 wins, 5 defeats and 3 draws.

During the “red card” games themselves, a winning position has been thrown away once (Hyde at home), Kidderminster were already ahead when Bishop received his marching orders, Barnet was 1-1 by the time Hunt made it 10 v 9 and it finished 1-1, Halifax remained goalless after Ormerod’s departure and away at Halifax earlier in the season, it was 1-1 when Stephen Wright left the field with the team from The Shay ending up 3-2 victors. It’s perhaps the suspensions coming from the accumulation of yellow cards that is doing greater damage.

So, as pointed out at the top of the article, the season has been a poor one so far, certainly when compared to the previous 3 seasons. However, as much as it could have been a lot better, it could also have been a whole lot worse! Middle of the table is about right and there is still time to improve all of the above statistics.

3 thoughts on “The Wrexham FC Season So Far in Stats – Is Middle of the Table about Right?”

Julian Price has been a Wrexham fan for life and saw his first match at the Racecourse in 1981 (a 1-0 defeat to Blackburn Rovers). A freelance web content writer, Julian also hosts a sports blog called Sporting Voices. His Wrexham FC claims to fame are: Almost played in the same school team as Chris Armstrong (was a year behind him) and spent a day with Steve Watkin on an accountancy course. View all posts by Julian Price