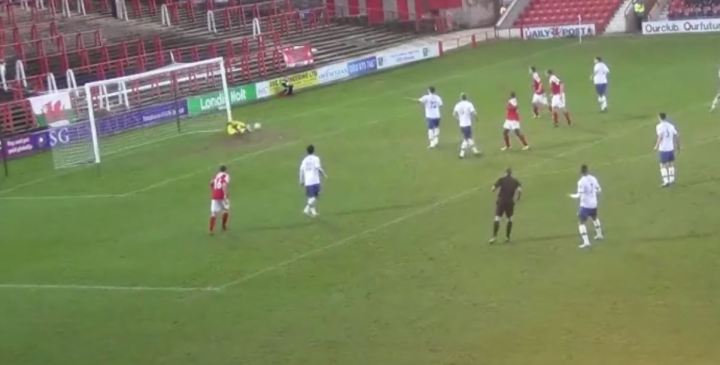 On reflection this was an odd game: we had to dig in and earn a point after playing with ten men for the whole second half, yet created pretty much all the chances, such as they were. The defence, widely recognised as our weak point, stood firm admirably despite the disadvantage, and despite the fact that our midfield failed badly in the task of protecting the ball in the second half. All in all, a pretty illogical game.

We started pretty well, with the front three looking a coherent unit as they hassled and pressured the Halifax defence. However, after about ten minutes the quality of supply to them deteriorated drastically, and it would remain inadequate for the rest of the game. Too many long balls were played without players being high enough up the pitch to benefit from the second balls and the trio of forwards suddenly found themselves struggling to influence the game.

Ormerod’s completely unnecessary dismissal merely exacerbated the problem, and in the second half we were faced with the task of keeping the ball in order to reduce the pressure on our defence. We failed to do so, regularly thrashing poor balls forward which squandered possession. Yet we were very sound when we didn’t have the ball, and Halifax barely threatened a well-marshalled back four (although we benefitted from a highly marginal offside call when they scored from a free kick). Indeed their best attacking option in the game had been the wide midfielder Kevin Holsgrove, who had threatened to gain a decisive advantage on a couple of occasions in his fascinating first half duel with Mark Carrington. However, Wrexham’s deeper positioning of the defensive block in the second half meant his threat virtually disappeared.

Andy Morrell switched to a 4-4-1 in an attempt to address the issue of ball retention, with Andy Bishop introduced in order to make the ball stick up front and Johnny Hunt and Theo Bailey-Jones asked to support him from the flanks. In theory it was a good move, and our defensive shape certainly continued to be good, but still players tended to go long, early and wild with their passing rather than keep the ball, so Bishop remained more isolated than Wrexham will have wanted.

Still, the defence stood firm, with the centre backs excellent – Dave Artell’s performance all the more impressive considering the fact that he was suffering from a virus: he looked white as a sheet after the match.

Overall, one would view this as a pleasing point, obtained despite the red card against a side which started the day in the top five. Yet it could have been more if we’d kept up the momentum of the opening stages, or indeed if Ormerod hadn’t kicked Marc Roberts. Probably best to stop thinking about it and move on. I like to learn a lesson from a match but, in the words of Homer Simpson, this was “just a bunch of stuff that happened”.

Man of the match: Steve Tomassen

One thought on “Wrexham 0 Halifax Town 0”