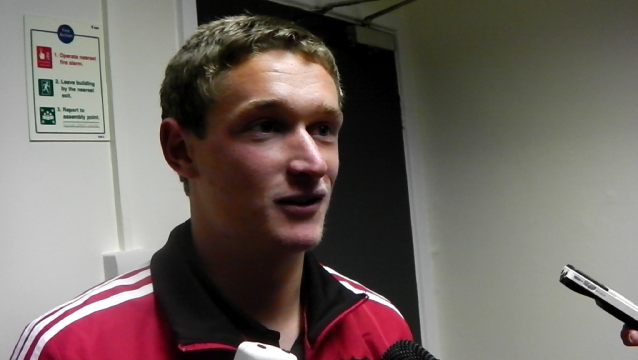 I wonder if Andy Morrell might be thinking about Nick Rushton as an option for the second half of the season. His loan is now up at Barrow – he marked his last game for them with a goal in the derby against Workington, and it seems he isn’t too sure what’s going to happen next.

@Simms91 an to you mate! Got my last game for them tomorrow and don't know what's going to happen after that yet

Perhaps Morrell will see letting him get more pitch time somewhere else is for the best, but I hope he’ll decide the time is right to see if he’s ready to play a more sustained role for us.

The view inside the club, as far as I understand it, was that a loan spell was a crucial tactic in helping Rushton make the step up to a regular first team place at The Racecourse. It seems he’s seen as one of the most natural finishers at the club, but perhaps needs to realise just how good he is. A spell leading the line elsewhere might just be what the doctor ordered. However, he’s already had two successful campaigns on loan in the Welsh Premier League, at first with Airbus and then Newtown, for whom he was outstanding as he scored eighteen goals for a struggling side. Surely the time to make or break him has come.

When he was given an opportunity last season he did well; indeed, the statistics suggest he did better than perhaps he was given credit for. four goals and six assists in twelve starts and nine substitute appearances is a decent return for a first season at that level, especially when you consider that he only played a full ninety minutes once.

His season was curtailed pretty sharply though as he wasn’t used in the run-in to the play-offs. In fact, he made only two appearances after the end of January, despite the fact that he had been in good form, getting a goal or an assist in each of his previous starts and scoring off the bench against Telford. Still, Dele Adebola came in and squeezed him out of the squad (I’m sure there’s a joke in there, but I’m scared to make it!)

Admittedly, there are plenty of attacking options available to Morrell. Apart from himself, he has Andy Bishop, Rob Ogleby, Brett Ormerod, Adrian Cieslewicz, Theo Bailey-Jones, Johnny Hunt and Joe Anyinsah all capable of playing in the front three. (Never mind the Marie Celeste of the transfer window – Bradley Reid’s return!) However, none of them have been consistently scoring: ironically, an area where he’s well stocked still has plenty of room for a striker who can stay fit and score goals. If Rushton isn’t that player, then we’ll have to think carefully about the next step for him.

The question to be asked, if he is farmed out on loan again, is whether we’re going to ever trust him at all. Letting a player build his confidence and experience in new pastures is a good idea, but if there’s no progression to the first team he’ll be in danger of stagnation. I believe they call it Obi Anoruo Syndrome. Nick Rushton isn’t going to turn our season around; he probably isn’t going to walk straight into a team with plenty of attacking options. But he’s worth having a closer look at, if only to ensure the right decision is made about him at the end of the season.