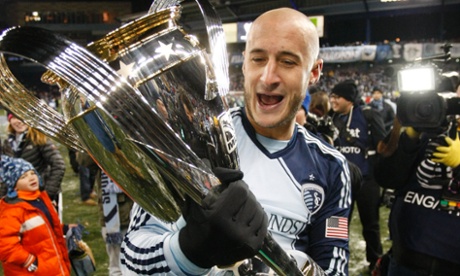 We had our spell in the BT Sport spotlight last Monday, but did you notice that the day before an ex-Wrexham player enjoyed international acclaim on the same channel?

It’s one of those things which sheds a really unusual light on Wrexham’s place in the scheme of things, or perhaps more relevantly the strength in depth of football in the English pyramid. Aurelien Collin was a decent player for us, but I didn’t see his conquering of the MLS coming!

Collin was brought in by Dean Saunders in an attempt to shape a side for his first full season in charge. The French centre back arrived for the backend of the previous season as Saunders looked to rip up his squad and start again, and he impressed at the back without looking particularly remarkable, to be honest.

When he turned down Saunders’ offer of a contract I was disappointed, but I wouldn’t really go any further than that. He was solid ad tidy on the ball but I didn’t really think he’d go on to great things and I certainly didn’t see him as irreplaceable. The excellent defensive unit Saunders did build over the next three years, and the remarkable record they accumulated, are evidence that his departure wasn’t exactly earth-shattering for Saunders either.

And yet how Collin has flown since leaving us! He must have a very good agent, as somehow Sporting Kansas City were convinced that a solid track record in the fifth tier of English football was just what an MLS centre back needs in preparation for marking Thierry Henry and Landon Donovan!

To be fair, he was right! Collin might have missed out on being part of Saunders’ miserly back four but he became part of another rock solid defensive unit. Built on an excellent record at the back, Sporting Kansas City were regular challengers for the title and Collin was at the heart of it. Indeed, he has established himself as one of the best defenders in a league which is constantly growing in confidence and reputation.

His progress reached a glorious culmination last Sunday. Hosting the final against Real Salt Lake (like all US sports, the league ends with play-offs to decide the champions), Sporting fell behind but Collin intervened to score the goal which took the game to penalties.

That was when the fun really began.

In a shoot-out notable for the chunkiness of the keepers and the remarkable number of bearded players stepping up to the mark, both sides were impressive from the spot until it actually counted for something. Both teams missed kicks which would have won the title, and the shoot-out went into sudden death and beyond.

Collin might have been hiding behind his team mates, praying that it wouldn’t fall to him to take a kick but as the shoot-out dragged on the list of possibilities was being slowly exhausted. Finally it came down to the tenth penalty taker: either Collin or his keeper.

Collin stepped up and confidently slotted the penalty inside the right post, possibly the best kick of the lot. Then up stepped Real’s most reluctant kicker and he rattled the bar. Collin had won the cup!

Quite what this tells us about the strength of the Skrill Premier, I’m not sure, but congratulations to Aurelien Collin. And spare a thought for his contemporary, Mani Assoumani. With Collin’s agent he might be playing for Fiorentina now!