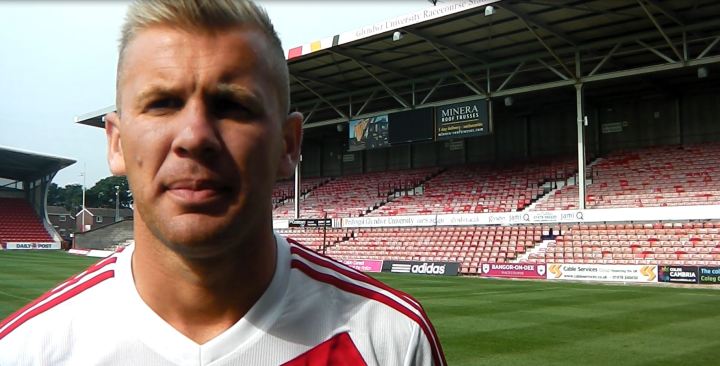 A remarkable match, no two ways about it. A ghost goal, two goals conceded straight from strong penalty shouts at the other end, a straight red card: it was plenty to distract you from the fact that this was a very good game of football between two of the better sides in the division.

Admittedly, Wrexham’s record suggests I’m exaggerating their qualities, but to be fair to them this side has a very different feel to the one we were watching at the start of the season. This was a second loss in eight games, and both defeats carried were suffered in extenuating circumstances. To be brutally frank, the regularity with which Wrexham have had a sob story to accompany their dropped points is a sign that they’re not as good as they can look: proper promotion contenders aren’t accident-prone. Everything happens for a reason, even bad luck.

Misfortune at not getting a penalty doesn’t excuse a failure to defend the counter-attack effectively. However, to be fair, Our performance against the top sides in the division suggests there’s little between us and them: we were better than Cambridge, who probably only drew because of Jos Mayebi’s calamitous mistake; beat Luton comfortably; and now have had slightly the better of the game at Kidderminster.

This game was dominated by Adrian Cieslewicz’s ghost goal, but really it was irrelevant. Despite the misdirected ire towards Amy Fearn, she got the decision right and we got the goal we earned. Andy Morrell was right to suggest afterwards that the six-minute hiatus between the ball (nearly) hitting the net and the kick-off affected our concentration and led to the Harriers’ immediate equaliser. Again, it was a self-inflicted wound: a decision in our favour shouldn’t be the cause of us conceding! Seems we simply don’t deal well with drama.

But there were plenty of positives.. We were threatening in the first half, and had the better of a flowing game between two passing sides. The pattern of the game was a little like a watered-down version of last Tuesday’s: Kidderminster enjoyed more early possession and passed patiently but we pressed hard, kept our shape and gained a grip on the middle of the pitch from which we were able to cause problems for Kiddy.

Dean Keates, Jay Harris and Joe Clarke were impressive again, and Brett Ormerod had a lively first half. Interestingly, Rob Ogleby was ploughing the most promising furrow down the right channel, driving at Chey Dunkley who often looked a little exposed as Amari Morgan-Smith failed to track back regularly in the first half hour and Danny Jackman was dragged wide. This led to the real turning point of the match after half an hour when Dunkley let the ball bounce in the area and Ogleby nipped in to go one-on-one with Danny Lewis.

It appeared at the time that Dunkley pulled Ogleby down, and examination of the match video confirms that impression. Photos taken from behind the goal show Ogleby has hold of Dunkley’s shoulder, which might explain why he was penalised, although they also show that Dunkley’s left arm is totally across the striker’s body, his hand gripping his shirt. On balance, it difficult to see it as anything other than a penalty, and thus a red card for Dunkley.

Wrexham were understandably aggrieved but that doesn’t excuse their switching off to immediately concede. Clarke ought to have dealt better with a cross from the left which Jackman did well to deliver as Ogleby hit him hard shoulder-to-shoulder as he ran onto the ball: the midfielder’s scuffed clearance fell kindly to the last player on the pitch you’d want it to as Joe Lolley lived up to his billing as the most exciting prospect in the division and drilled it in with his stronger left foot.

Lolley had shown his ability as early as the seventy-fifth minute when he carried out his trademark move and cut inside to shoot. Obviously there’s a danger he’ll suffer from Lee Trundle Syndrome and become much less effective once defences set themselves up to deal with his favoured movements, but Wrexham often looked to usher him into crowded central areas without hampering him. His first touch is very sure, enabling him to swiftly get at the full back before the defence can close ranks on him.

Wrexham responded well to the goal and started the second half terrifically. Harris’ shot rebounded off the bar, hit the flying keeper on the back of the head and fell wide when it could easily have dropped into the net, but again there’s no point in dwelling on hard luck stories, especially as our hopes of fighting back were dealt a crushing blow when lightning struck twice shortly afterwards.

Again Wrexham had a penalty shout; again the Harriers broke from it and scored. This was a much less convincing appeal by Andy Bishop: there was certainly contact as a defender stretched round him to try to pinch the ball, but it would have been soft. While we protested, Lolley struck again on the break.

Still, we showed spirit and kept going, benefitting from a smart, swift substitution: Ormerod had suddenly gone quiet and with a game coming up on Tuesday the bench wasted no time in giving Cieslewicz some extra time on the pitch: it was his birthday after all! The result was a superbly taken goal and the resulting viral video!

But what followed was hugely disappointing. Straight from the restart Kidderminster were allowed to penetrate and Mayebi had to parry Lolley’s hat trick attempt behind. From the corner, Dunkley got a jump on Stephen Wright and we were two down again.

And immediately from the kick off the game was gone. Bishop had been an angry presence throughout the match: he’d confronted the referee as the teams left the pitch, was frustrated by the failure of his penalty shout and now he reacted when Kyle Storer fouled him. That moment was a sort of microcosm of how our season has gone as we’ve been too easy to rile and have suffered from inconsistent officiating.

I’ll make no bones about it: it’s very easy to admire the way Kidderminster play football, but hard to like them as a team. For a couple of years now they’ve been a side which preys on the referee’s mind, complaining, play-acting and cynically taking every advantage they can. Storer, their captain, epitomises this and it wasn’t pleasant to see him chasing the referee around throughout the match, demanding decisions, although one couldn’t claim Wrexham were innocent in this regard to be fair.

Once Bishop went near Storer, he was bound to make a drama of things; when Harriers tried to get Clarke sent off for what was a mistimed challenge on Jackman rather than a violent foul (the ref rightly gave a yellow) Dunkley shoved Clarke hard in the chest twice with two hands, but the Wrexham midfielder stayed on his feet. There’s no doubt that had Storer been on the receiving end of that he’d have been on the floor demanding a red; I’d rather support a man like Clarke week-in week-out, but when sides play the system they can make us and the officials look like chumps.

But ultimately, Bishop raised his hands at least twice, inviting the referee to punish him. If we’re going to stop feeling like victims we need to play our part by not creating the conditions of our own downfall.

Even with ten men and Mark Creighton an emergency target man we threatened to at least haul our way back into the game, but in the end it was another harsh defeat to consider. There’s never a dull moment following Wrexham at the moment, and I think that’s the problem.

Man of the Match: Dean Keates