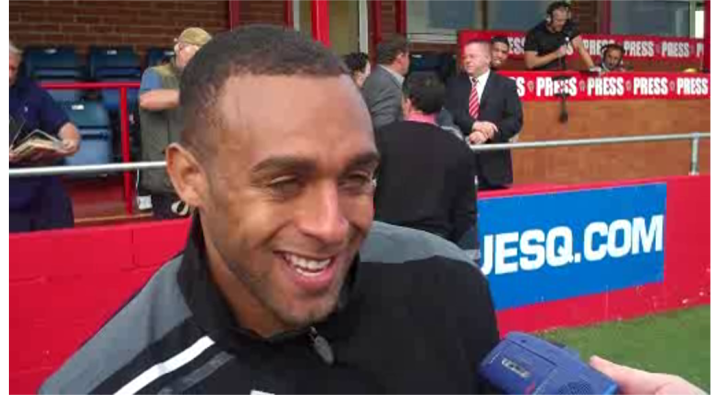 Short answer: trouble! Alfreton are decent, stand two points off the play-offs and always seem to get results at The Racecourse, so we’re in for a rough ride if we’re to avoid a repeat of last season’s first round fiasco.

Have a look at Alfreton’s squad list and you’ll see why they’re on the verge of the play-offs. They’ve got plenty of options with wide experience of doing well in the Conference, and a lot of experienced players who’ve spent plenty of time in the Football League. Just look at their options at centre back: while we’ve been struggling to put a pairing together, changing more times than Lady Gaga at the VMAs, they can call on Chris Westwood, Darran Kempson, Michael Wylde and Nick Fenton, and there are other who could fill in for them too.

When I saw them against Aldershot they lined up 4-4-2 and pulled off a superb 3-2 win. Not that Nicky Law is bound to start that way against us, as he’s shown himself to be the Conference equivalent of Sam Allardyce. Allardyce is gruff, stroppy and easily portrayed as an old school tactical dinosaur, but if you fight the urge to fall into an easy stereotype which he’s happy to play up to, you find he’s actually a pretty wily, progressive tactician. Law is similar: his demeanour can be unnecessarily aggressive and his approach can sometimes appear basic, but he’s a crafty character who has been consistently getting the best out of his squad for a couple of years.

He can be tactically innovative – too much so when the sides first met and he paid us too much respect, going for a man-to-man approach which crashed and burned in the most spectacular manner. As his touch line behaviour hadn’t been great in that match either, I felt entitled to use that disaster to smugly score points off him from the comfort of my front room. And since then? He’s learned from the mistake, found a way to combat our 4-3-3 and in three trips to The Racecourse won two and drawn one. Who’s looking smart now?

So don’t assume it’ll be 4-4-2 he lines up with today. He’ll look for ways to expose us and adapt as necessary. In Jake Speight, of course, he’s got a striker capable of playing in a two up front or wide in the three, so he has that flexibility in a key area: Speight has scored four goals in his last three games, and hit the net in each, so it appears he’s in the form which made him top scorer in his season at The Racecourse.

It interests me that Law has enjoyed a run of success at Wrexham but suffered another home loss to us last season – and that despite us having a player sent off early in the second half. It seems to me that in the past what Law has done well is set up a compact side which defends ruggedly (Brian Little’s gift to us that keeps on giving is the way Kempson always seems to turn up at The Racecourse desperate to prove to us what he can achieve and plays a blinder!) and hit us on the break. At home, when he has to carry the game to us, perhaps he’s had a little less success, although I’d suggest having looked at his current squad that he might have the wherewithal to address that this season. John Akinde offers a physical threat, both in terms of size and pace, which compliments Speight well, and when they played 4-4-2 in the Aldershot match their width gave good service in the box.

I suppose the FA Cup tie last season didn’t quite fit the pattern: if Joslain Mayebi hadn’t had a meltdown we’d probably have won: we were certainly coasting when he spilled a free kick for the equaliser. But you can’t argue with a 4-2 defeat, and you can’t argue with Law’s record in North Wales. We’re going to have to perform today to avoid history repeating itself.