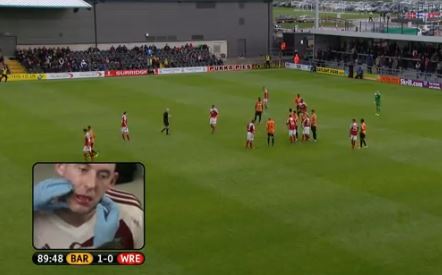 So Stephen Wright gets a three game ban for allowing himself to be smacked in the mouth by a celebrity. And it wasn’t even Cheryl Cole, poor bloke. Naturally anger is directed at the FAW disciplinary committee which returned the verdict, but such fury is misplaced. They can’t help the rules they have to play by.

It’s a remarkably similar situation to the one which Greg Dyke commented on last week: when Fernando Torres disgracefully scratched Jan Vertonghen it was captured by TV cameras, but the system meant the disciplinary panel could do nothing. The parallels with the Wright-Davids altercation are striking.

The bottom line is this: no one in their right mind could look at that video and say Wright deserved to be sent off, yet there was never any real hope of him getting let off. That fact is as damning an indictment of the disciplinary system as you could imagine: clearly the last thing Wright could expect from the committee was justice.

But I reiterate: it’s unfair to blame the people who passed down the decision. The FAW can’t rewrite the rules and the fact is that the system is set up to protect the referees’ dignity rather than correct miscarriages of justice.

I can understand that, to an extent: I’m uncomfortable with officials being undermined after the event and feel their primacy on the pitch ought to be protected. That’s why I’m a little uneasy about the creep of technology into the game: it’s fine if it is an aid to officials but will be a disaster if it starts to make them look foolish and impotent, as we saw  happen to the umpires during the Ashes this Summer.

So the appeals process only brings genuine rewards in unusual circumstances. That was why, farcically, the fate of our appeal rested on the referee’s level of literacy rather than what the panel saw on the DVD (A video, you’ll be amused to discover, which was recorded off my TV screen as BT failed to provide either side with footage of the match and the appeal had to be lodged quickly with the club providing the evidence!)

Basically, if the referee had recorded the reason he sent off Wright in an ambiguous manner which the panel couldn’t argue was contradicted by the evidence, then the punishment would stick; if his report exaggerated or misrepresented the facts in any way, we stood a chance. That’s what happened when David Artell had his red card overturned at Mansfield last season: although it was a poor decision it wasn’t anywhere near as blatant an outrage as the Wright dismissal because he did catch his man high and late, albeit unintentionally. However, the referee’s florid description of the event allowed the panel wriggle room: his purple prose made Artell’s challenge sound much worse than it was so he was off the hook.

Wright was only ever going to get the reprieve he deserved if one of two things happened. First, the referee could do the decent thing on reflection and say he might have made an error. That was never going to happen. Secondly, his report could have exaggerated what happened. He might have said Wright threw a punch, which he absolutely didn’t; perhaps if it had merely said Wright shoved Edgar Davids then it might give the panel scope to let him off.

But the ref was cute. He reported that Wright had charged at Davids. And he did. No doubt it led to essentially the following conversation in Cardiff:

“Did he deserve to get sent off?”

“Did he do what the report said though.”

“Well, we’re stuffed then. Let’s at least do something and shave a game off.”

If that is what happened, at least the disciplinary panel are probably as frustrated as we are.