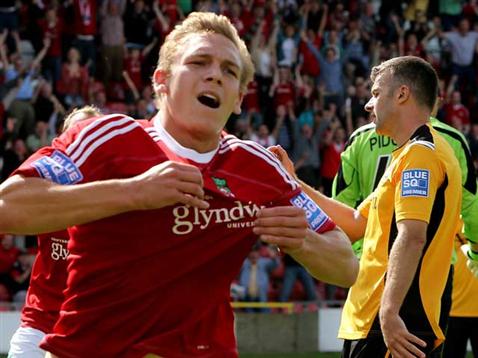 Hmmm, not sure how to feel after that.

On the one hand, defeat is fairly inconsequential. I’m not convinced that who you play in the play-offs matters enormously, nor whether you get any advantage from playing the home leg second, unless it goes into extra time. I’d rather establish a first leg advantage, no matter how narrow, than chase a deficit in the second game: last season’s play-off didn’t make me change my mind at all in that respect!

Andy Morrell and Billy Barr clearly saw it as fairly inconsequential too. Their team selection showed that, plus the fact that an early injury to Nick Rushton meant we threw on young Bradley Reid ahead of Brett Ormerod. Jay Colbeck being the next man on further illustrated that point. The agenda was clearly to protect as many starting players as possible, an approach I fully subscribe to.

So defeat wasn’t exactly the most awful thing that could happen to us. I can’t help having a slight sense of frustration though. Seeing how Kidderminster performed really brought home how costly those home draws have been. If they’re up at the top of the table, then this is a very winnable league and we’ve missed out!

I really was surprised by the Harriers performance. When their assistant Gary Whild came up to the press box afterwards he spoke about how proud he was of how team had played, and while I can understand him wanting to talk his side up and acknowledge their ability to come up with an away win when the stakes are high, the notion that Harriers had carried out a gameplan to establish control of the game was a little far-fetched!

Let’s put this into context. That Wrexham side had just two players in it who played in the same position at Wembley. The spine of the team, Leon Clowes, Rob Evans and Nick Rushton, had twelve career starts between them for us going into the game. The first two subs we put on have two career league starts between them.

For a Kidderminster side, buoyed by the news that Mansfield had lost at Braintree, to come out and struggle to command a makeshift Wrexham side which looked disjointed, quite understandably considering its youth and the fact that it was a hybrid side which had never played together before, wasn’t impressive by any definition I can imagine. It was certainly quite a contrast to the performance which Mansfield put in against us a couple of weeks ago, in defeat. If our full strength side had played yesterday against such a Kidderminster showing, I’m very confident we’d have three more points. That particular confrontation might well get a chance to play itself out in a couple of weeks, of course!

From a Wrexham perspective, there was plenty to feel optimistic about. Danny Wright got another goal, Neil Ashton got another ninety minutes in as he comes back from injury, and Joe Clarke reminded us of how far he’s progressed this season, although he did seem to tire a little in the closing stages.

The youngsters were the ones who really caught the eye. Alex has already drawn our attention to that after the Cambridge game, and was particularly taken by young Evans’ performance. Morrell was too, giving him a start, and he looks a neat midfielder who doesn’t lack confidence and try to hide as many players so young might. The fact that he’s eager to have a shot from distance is an illustration of that, and his willingness to have a go from outside the box led to Danny Wright’s superb goal.

Bradley Reid showed coltish promise too, running eagerly on the diagonal at every opportunity and showing a terrific turn of pace. It’s a huge step up fo both of them to make, and clearly they’re works in progress who might not be ready to take a full part in first team action for another year or so, but the experience will have stood them in good stead.

Morrell and Barr knew, in giving them a shot, that they were taking a calculated gamble though, and while they did the right thing and will surely reap the benefits in the future, they knew the risks, and we paid a price on the day. Inevitably you learn from your mistakes, and on a sticky pitch the two youngsters occasionally lost the ball unneccesarily. No complaints about that; it was part of the learning process, and was proof that they were showing up for the ball. However, one of those instances led to the winner: no tears should be shed about that, but it’s another indication of how our own agenda played into Kidderminster’s hands. We were playing the long game and accepted that their could be a price to pay on the day.

The other young lads did well too. I must admit that I thought Leon Clowes wasn’t going to make the step up to the first team last season, when he had a rough ride against Hinckley in the FA Trophy. He looked too slow on the turn to be able to compensate with his clear physical advantages, and as he got older, I reckoned, he’d not get any quicker. Maybe not, but on yesterday’s showing he’s got smarter. Admittedly, he was out-paced by Michael Gash, who is no greyhound, for the winner, but to be fair the combination of he and David Artell was selected in the knowledge that they wouldn’t have much pace between them.

Clowes showed this week that he’d developed significantly over the last season, a loan spell in the League of Wales no doubt being a key factor in that process, and he might well be a useful part of the squad next season.

The other young lads are more established, but it was good to see Declan Walker play with such confidence. Admittedly, he squandered some good crossing positions late on, as we seemed to run out of steam just when we needed to put pressure on Kidderminster, but he put some good stuff in too and ventured forwards dangerously. It was a shame Rushton departed so soon, as the Cambridge match showed that they seem to be on the same wavelength down the right – Jay Colbeck’s goal was a terrific illustration of this.

Of course, Rushton’s participation was ended prematurely, and hopefully his season wasn’t curtailed at the same time. Having watched the replays, the more I see Chey Dunkley’s challenge on him, the more concerned I get: he certainly left his elbow in and was remarkably fortunate not to be sanctioned. Similarly, Callum Gittins’ late challenge on David Artell in the second half could easily have seriously hurt the centre back, but Graham Horwood wasn’t about to give more than a yellow: why on earth would he break the pattern of his grim performance and suddenly get something right?

It was a bit of a surprise really: Kidderminster are usually opposition I watch with a certain admiration, but yesterday they left a bit of a sour taste in the mouth. Like I said at the start, I’m not quite sure how I’m meant to feel after that. It’s a combination of optimism and frustration at what might have been.