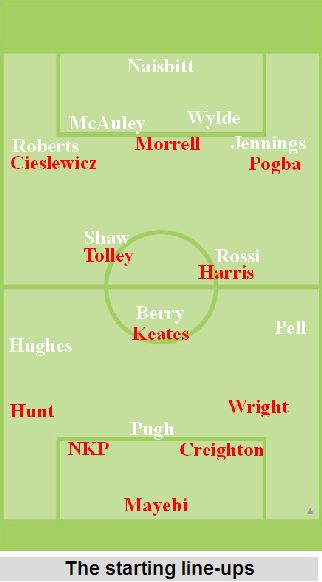 The post match comments from Andy Morrell and Stephen Wright summed this performance up. Wrexham underperformed massively, looking like they had little in the tank for the match, and should have been very happy with the point. It was a match where too many small factors weighed against them, tipping the balance in Cambridge’s favour.

The first key factor was the suspensions Wrexham suffered. In recent weeks, their main mode of attack has tended to be to go direct and dink balls over the top of the opposing defence to turn them. Their three strikers can then chase them down, force a hurried clearance, and the Wrexham midfield therefore have the chance to win the ball back high up the pitch and establish a bridgehead in opposition territory.

It’s an approach which no doubt has its genesis in The Racecourse pitch – there’s precious little in Andy Morrell and Billy Barr trying to set the side up as they were at the start of the season, knocking it around on the floor and through a playmaker like Lee Fowler when they know that at least half their games will be played on a surface which makes confident passing impossible.

The approach has become more engrained, and more effective, since Dean Keates has returned to the side as he has the ability to clip those balls accurately over the back four and give the strikers something to chase. However, at Cambridge it didn’t work. A big part of the reason for that was the absence of Danny Wright and Jake Speight, probably the two most effective strikers in the squad when it comes to playing this way. Both are adept at chasing defenders down, Speight has the pace to get in behind them and beat them to the ball and Wright, as well as being no slouch and able to flick long balls on, is expert at closing down defenders and giving them a hard time.

In their absence Wrexham were rarely able to turn the defenders and hem them in as they would have liked. Although Adrian Cieslewicz has pace to burn, he’s more comfortable dropping deep and receiving the ball to feet, then accelerating at defenders rather than adopting a higher starting positions and running them down. In the first half his interplay with Johnny Hunt offered occasional moments of promise, but they were sporadic and he seemed inhibited once more by having to play on the left and cut inside rather than take the direct route round the outside on the right.

Wrexham also suffered from a quiet day from Jay Harris. His problems with back spasms are naturally hampering him, and it certainly looked like that was the case at the Abbey Stadium; he was a shadow of his usual self, and that energetic chasing which he brings to midfield is crucial to the tactic working as he hoovers up second balls and keeps the pressure on the opposition.

As a result, Wrexham only really executed the tactic effectively twice in the first half, and created nothing.

Things were also made difficult for them by a gusty wind, although as Morrell pointed out, that ought to have suited them in the first half as they looked to drift balls in behind Cambridge’s defence, and by a dogged, organised Cambridge side.

Don’t underestimate the contribution Jez Geroge’s side made to making Wrexham look bad. They went into the game suffering from injuries, with a couple of starters not fully fit, but George marshalled his resources intelligently. It’s easier to make a depleted side defend than create, and he set his side out well. As he outlined after the game, he  respected Wrexham’s midfield and matched up to them in order to stifle them. That certainly had the desired effect: part of the reason why the dinking of the ball over United’s defence was ineffective was the fact that, with

United players constantly pressuring them, Wrexham’s midfielders had to play their long balls from deeper than they would like, meaning they were less likely to be accurate and there was more time for United’s defenders to get into position.

The other side of the approach was that Cambridge were as unable as Wrexham were to create anything  themselves. There only threat came from Rossi Jarvis’ danger corner delivery, as their reactionary midfield meant they were rarely able to commit men forwards.

Therefore, young Andy Pugh was regularly left isolated up front. He ran tirelessly, but was nowhere near well enough equipped physically to compete with Mark Creighton, whom he bounced of on a couple of occasions, the centre back looking like he was flicking away a pesky fly. As a result, he was given a thankless task, with Luke Berry, ostensibly playing in the hole, rarely close to him when the ball was played forwards because his primary role was to sit on Dean Keates and prevent him from delivering the ball forwards accurately.

Near the end of the first half, United seemed to hit upon a promising avenue forward though. Hunt was again filling in well for Neil Ashton, but Cambridge’s wide right midfielder, Liam Hughes, enjoyed a considerable height advantage over him. He was rather gauche on the floor, massively more effective for his defensive energy than his use of the ball, but Cambridge started to get a bit more of a toehold in Wrexham’s half when they began hitting long diagonals for him to contest in the air with Hunt. It was Hughes’ physical presence, winning the ball on the left after a messy period of head tennis, which set Tom Shaw up to score the opener.

Wrexham found themselves trying to haul themselves back into the game with a rather hybrid approach. Glen Little came on and, as always happens, Wrexham immediately started working the ball shorter with midfielders offering themselves deeper and deeper in an attempt to link up with play. However, the strikers’ positioning showed their desperation for a goal as they pushed high up, waiting for long balls rather than drop deep to join in play.

There were both positive and negative consequences to this. On the one hand, Cambridge had no real outball at the back: all their back four were penned back, and Wrexham took control of the middle of the pitch. On the other, the straight line of strikers meant there was little scope for defenders to be pulled out of position, say to pick up a forward dropping deep. There was no space behind the back four to get into and United’s defenders were able to keep their shape easily.

With a resulting lack of opportunities for the midfielders to link with the strikers in any way other than to knock it long and let them fight for it, Wrexham were looking disjointed, knocking the ball around neatly in front of the Cambridge rearguard, but not threatening them. Indeed, it was Cambridge at the other end that looked more threatening, breaking well, particularly once Michael Gash came on and made the ball stick more up front. With Berry, Pell and Hughes starting to get more involved in attacking positions now the ball was being held up, Cambridge started to break threateningly, although they were often undecided whether to commit to the attack with numbers or take the ball to the corner flag. Despite that conundrum, Wrexham were twice indebted to Joslain Mayebi for denying powerful strikes from the edge of the area.

Things changed when Wrexham took a decisive, inevitable gamble. It was a rare case of a Hail Mary pass that actually worked. Mark Creighton was sent up front and they gambled with three at the back. With Steven Leslie on for Hunt and offering more thrust from left back, there was also more creativity when attacks were cleared, although Hunt had overlapped gamely to be fair. The switch to three in defence was a particularly risky move bearing in mind his presence in that trio though, but he wasn’t tested when he tucked in alongside Knight-Percival and Wright.

At the other end, the introduction of Creighton as a target man solved the problem of penetration. He was winning a prodigious amount of headers even before Cambridge’s excellent stopper Michael Wylde went off injured. Now Wrexham were contesting in dangerous parts of the box because Creighton was flicking the ball in there, and his intervention led directly to Ogleby’s equaliser.

Admirably, albeit perhaps inevitably considering the circumstances, Wrexham continued with that bold formation – indeed, they even shoved Keates higher up the pitch to virtually play with five up front – and having created absolutely nothing until the goal, they suddenly looked like, in the time added after the five minutes of injury time, they might actually snatch victory as Cambridge suddenly wobbled.

Which leads to an interesting question about Wrexham’s approach: ought they to have a more clearly defined Plan B? On Red Passion, Dean Saunders tends to be denigrated as a manager who wasn’t tactically flexible, and didn’t make changes during the game, while Morrell and Barr are often portrayed as more willing to make alterations. This seems, to me, to be the opposite of the truth.

Not that this is necessarily a bad thing; sometimes it’s good to know what you’re good at and stick to it, certainly when a side has been flying all season as Wrexham have been. But in the sort of situations Wrexham have been in over the last week, perhaps it would be a good idea to have a more clearly-defined fall-back position.

Saunders often talked of having a second tactic which the side had prepared for when it was required, and he regularly switched to 4-4-2 this season and at the end of the previous campaign when things weren’t going his way.

Morrell and Barr, by contrast, tend to keep with 4-3-3, making like-for-like substitutions and when they do make a change it tends to be a late desperate move, throwing Creighton forward into a four-man front line and leaving the side a man short at the back as they did at Cambridge, for instance, rather than do something earlier. Whether an early, less drastic switch when games are going against them is a better option is one to debate. Discuss.