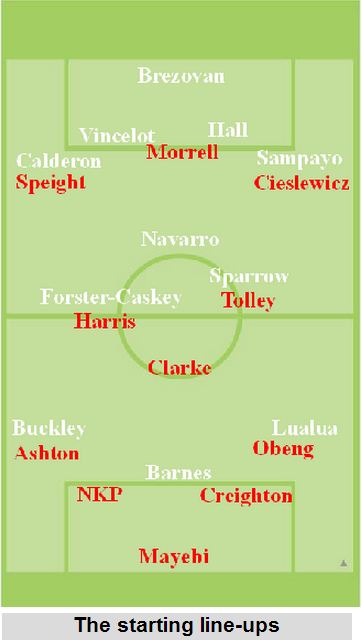 What a magnificent performance by Wrexham, and what a fascinating insight into how good their defensive unit is. While a jocular Andy Morrell was exaggerating when he said his side didn’t touch the ball in the last half hour, there was an element of truth to his comment. Briighton penned his side back, but they were still forced to resort to long range shots as the defence which has frustrated the Conference and withstood a similar late surge from Brentford in the last round showed it could repel a Championship side too.

Of course, the contrary argument is that this wasn’t a Championship side, but the weakest side Gus Poyet could get away with fielding. There’s truth to that too, but it’s not a point which should be laboured too much. Youngsters Hall and Forster-Caskey have already forced themselves into the first team squad and were two of Poyet’s most impressive players on the day, while the front three and midfield bore a decent similarity to recent line-ups. Admittedly Mackail-Smith’s absence was notable, and Poyet’s substitutions raised eyebrows, and he seemed markedly jocular on the touchline throughout. But this was still quality opposition, and Wrexham did themselves proud.

They started well; Andy Morrell opted to play himself through the middle rather than look to Jake Speight to back into the centre backs, and the ploy was a massive success in a first period which, impressively, Wrexham edged. Morrell, rolling back the years, used his nous to hold the ball up and occupy the centre backs, while Speight’s pace and ability to cut inside caused genuine concern to the Brighton back line. Admittedly, Brighton had the only efforts worth noting in the first fifteen minutes, but they were both from outside the box, and one was created by sloppy passing by Joslain Mayebi. Once Wrexham started creating they carved out a series of half chances, and two clear cut opportunities, neither of which were taken by Speight. With good service from Ashton down the line, Speight was getting in behind Calderon more often than you would expect or Poyet would like, and he also teed up a decent chance for Jamie Tolley having got round the back, his pull-back just too far in front of the stretching midfielder to allow him to fully control his shot.

The midfield were playing their role to the full: Jay Harris was snapping around with abundant energy, almost an exaggerating caricature of himself as he buzzed around, although two knocks slowed him slightly as the half wore on; Joe Clarke was economical in possession and broke things up effectively on numerous occasions against the smaller Brighton midfielders, and Tolley was almost Harris’ equal in energy, offering support to Morrell but swiftly able to get back into position when Wrexham lost the ball and had to regain their midfield shape. Indeed, in possession Wrexham’s formation looked more like a 4-2-3-1 with Tolley pushed up behind the lone striker, reverting to 4-3-3 when Brighton got the ball back.

For Brighton’s part, their main threat undoubtedly lay down the flanks. As I’ve pointed out on numerous occasions, Wrexham’s formation can leave the full backs exposed, and Poyet had abundant quality on the flanks to exploit that. Both Buckley and Lualua have terrific pace, in fact the latter actually looked marginally quicker than Curtis Obeng, which is no mean feat! They posed terrific problems and provided a regular supply of balls into the box, but Barnes struggled to make an impact on the redoubtable of Creighton and Knight-Percival, and Wrexham’s proactive approach meant the rest of the midfield weren’t getting into the box as often as they’d like.

Navarro, looking to make play from a deeper position than his two midfield partners, was confident in his use of the ball, but his measured approach was perhaps not best suited to the situation; particularly in the second half, when Wrexham retreated into that well-grooved defensive shape, he slowed things down when Brighton would have been better off looking to get in behind the visitors before they settled into position.

Still, the half ended goalless, and Wrexham would never quite regain the level of control they attained in the first period following the break. As a result the goal Brighton managed early in the second half looked likely to be decisive. It seemed to come as a result of Wrexham getting caught a little cold as they settled at the start of the half; once more Lualua got into an advanced position, and when he pulled a nasty ball back into the area Forster-Caskey burst took him past the midfield markers; Ashton tried desperate to cover across but arrived a fraction too late.

Wrexham weren’t enjoying the same equilibrium in the middle of the pitch, but after looking uncomfortable for a couple of minutes after the goal they took the game to Brighton bravely. The equaliser was down to a typical burst of pace by Adrian Cieslewicz, aided by a fortunate deflection, but the warning had been laid out in the closing minutes of the first half. Cieslewicz had been quiet for the first thirty-five minutes, but in the minutes before the break he began to run at Sampayo and caused him problems.

Sampayo and caused him problems. He continued to do this in the second period and eventually got his reward.What happened within moments of the ball hitting the net remains the key debating point of the match. Poyet had spoken before the game of wishing to play solely his development squad for this match, and as Cieslewiczaccelerated into the box he had two young substitutes stripped off and ready to come on. Having already lost Lualua shortly after Brighton’s goal to injury he’d intended to bring of the other flying winger Buckley and Navarro, two more senior players. Rather than reassess the situation as a consequence of the equaliser, he pressed on with the change. At the time it looked like he simply didn’t care about the result; maybe that is the case, but he defended himself afterwards by claiming the changes rejuvenated his side, and to be fair, he had a point. Following the goal Brighton monopolised possession to a dangerous extent; although Wrexham fans are in the rare position of having a defence which looks capable of dealing with being starved of the ball.

The youngsters certainly brought something to the game, particularly Anton Rodgers, son of Brendan who clearly has taken on board his father’s philosophy and looked the sort of neat, lively passing midfielder who could slot neatly into Swansea’s side. However, Poyet also opted to change his side’s shape, and this decision was considerably less effective. With Wrexham congesting the area on the edge of the box with remarkable efficiency as the midfield three slotted in in front of the back four, it seemed obvious that Brighton’s best chance was to get the ball out wide and try to stretch Morrell’s side out of position, yet Poyet opted to reduce his side’s width,

He’d already replaced Lualua with Adgestein, who rarely threatened to go past Obeng on the outside and too often cut inside, running into the congestion on the edge of the box. Poyet opted not to replace Buckley on the other flank, preferring to push Sparrow forward to support Barnes instead, but that simply added another body to the crowd in and around the D. Right-back Calderon was asked to push up the flank, which Brighton could certainly afford to do as Wrexham retreated, often leaving Morrell isolated up front, but he was hardly liable to run at Ashton as Buckley had. Attack after attack broke down as Brighton ran out of space, and their efforts were restricted to shots from the edge of the box once more.

Morrell and Barr opted to switch to 4-5-1 in the closing minutes in an attempt to close the match out, and the move immediate bore fruit when Glen Little, who had been playing wide on the left of the attacking trio, albeit forced deeper by the circumstances of the match, was now covering in front of Obeng on the right, and almost immediately made a crucial interception on the edge of his area around the outside of the full-back as he tucked in.

Indeed, in injury time Wrexham threatened four times to snatch a winner: from a set-piece which saw the centre-backs enterprisingly sent forward, Tolley lashed in a volley which was parried and swept the rebound in to Speight, who executed an airshot from six yards out; then Romain Vincelot twice committed horrible errors in his own area, perhaps indicative of a sloppiness born from a desperate desire to get the ball back into Wrexham’s half.

A winner would have been just reward for Wrexham’s spirit and first half performance, not to mention it being the least their magnificent support deserved, but to be fair Brighton dominated the second half, particularly after the equaliser. The fact that Wrexham’s defence held firm illustrated a fact that regular fans will have known already though; this is the best-drilled side Wrexham fans have seen.