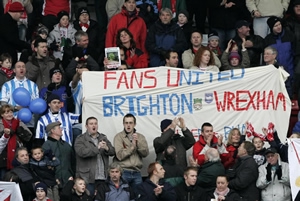 It’s a long time since I’ve so excited about a game as far in advance as this!

In fact, to be honest, I’ve felt excited about the Brighton match from the moment the game came out of the bag! (If I’d been this guy, maybe I’d have even been excited before the draw was made!)

Of course, part of my excitement is because I’m eager to see the best Wrexham side for the almost a decade test itself against a genuinely strong team. If nothing else, we’ve a defence which has looked capable of withstanding terrific pressure all season; it was pretty untroubled at Brentford and now it will get one heck of an examination.

However, my sense of anticipation is mostly based around the fact that this tie means much more than that. Indeed, for me what happens on the pitch feels almost irrelevant.

The thrill of meeting Brighton again is immense. Here is a football club, and more importantly a set of fans, whose example is exemplary. They stand for much more than a team in Sussex.

I guess they are a product of an enlightened environment as the city enjoys a perfect storm of circumstances, close enough to London to absorb its cosmopolitan air, but like many coastal towns imbued with a healthy dose of ideas from elsewhere, creating a pervasive, well-informed, liberal counter-culture. The result is a set of fans who appreciate that being a football supporter goes far beyond backing their club. It also carries a responsibility to the shared experience of the football fan.

It’s a sensibility which explains why a real football fan’s heart breaks when we think of Hillsborough, Heysel or Valley Parade. Why we might relish rivalry, but appreciate that it’s a game and, like the soldiers in the trenches of Flanders if you don’t mind me pushing the metaphor as far as it’ll stretch, realise we’ve essentially got a lot more in common with our opponents than we do with anyone else. It’s why when we look at the travails of Darlington and Kettering we want to help, rather than look at the effect their demise would have on the table.

Brighton’s fans are uplifting. Indeed, it wouldn’t go too far to say they’re a force for good in the game. Just look at how there links were formed with us; they joined in the anti-Guterman protests which happened to coincide with their coming to The Racecourse, raised funds for us when most would be one-eyed and shovel any cash towards their own club, and most memorably, organised the Fans United day in November 2004 in an attempt to help save us.

It’s a relationship the likes of which I’m not aware of outside the Bundesliga, where a remarkable network of club firenships exists, reflecting the liberal society they’re based in.

And so we go back to the fans who gave us such support. Now they can see how we’ve grown. We might have gone backwards on the pitch, but we’ve taken giant steps forward off it, and can travel proudly to Brighton  as a wholly fan-owned club.

One thought on “The Only Way is Sussex”