So, farewell to 2011. The off-pitch trauma might make it feel like a year we’re glad to see the back of, despite the hope offered by the WST’s eventual takeover, but ironically the contrast on the pitch couldn’t be greater. No matter which way you cut it, in terms of results 2011 was one of the club’s greatest.

There’s no better place to start than by looking at how many games were won this year (fig. 1). In those terms, 2011 was the second best year in Wrexham’s history, as only once, in 1977, has a Wrexham side won more matches in a calendar year. 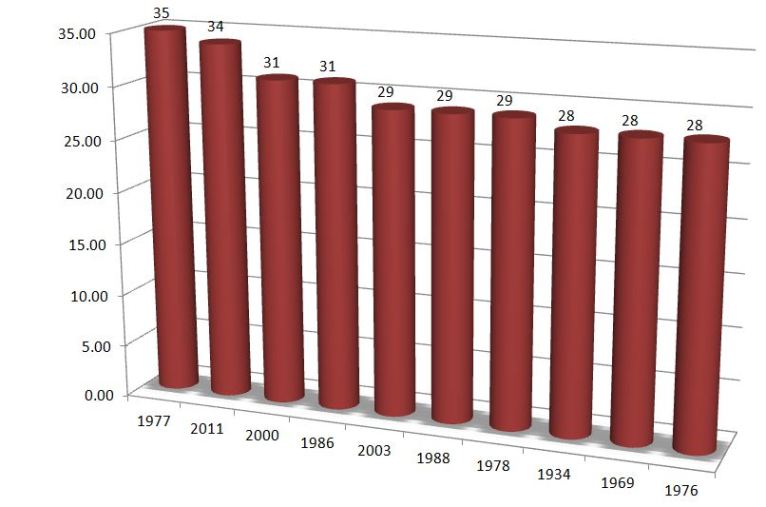 fig. 1 Most wins per calendar year.

1977, the only year in which we won more matches, was strangely similar to 2011, of course. In both those years and excellent first half of the year ended in disappointment. In 1977 a first promotion to Division Two was squandered in the closing games of the season, while in 2011 the play-offs brought an abrupt end to our hopes of a return to the Football League. In 1977 we recovered from our disappointment to register the greatest season in the club’s history in 1977-8 and win the league; let’s hope Andy Morrell’s side are able to emulate that feat!

Of course, Wrexham’s success is built on a soldi defence, so it’s no surprise to find that few years have seen our defence as miserly as 2011.

As can be seen from fig. 2, if you ignore years in which we’ve played fewer than forty matches, there have only been seven years in which Wrexham have conceded fewer goals. Imagien how much better that chart would look to the current defence if the bizarre blip that was the Gateshead thrashing hadn’t happened!

However, there’s still an arbitrary sense to that statistic, as naturally we’ve played a different number of games in each of those years. For a more accurate sense of how solid our back four has been this season, it’s worth looking at how many goals per game the side has conceded this year (fig. 3). 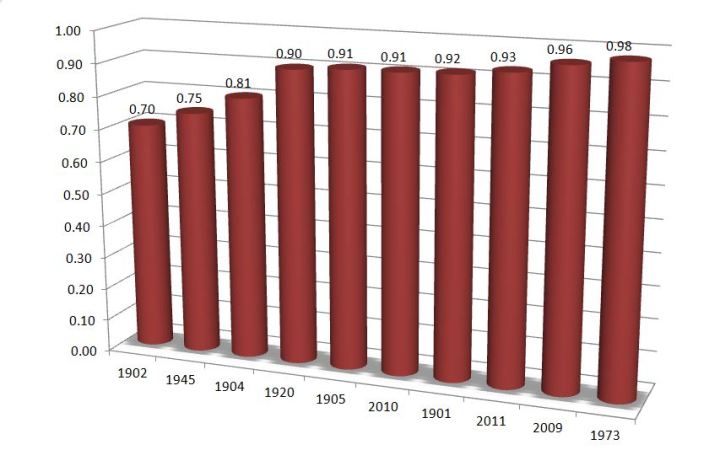 Again, 2011 comes in eighth, and if anything the statistics show how well Dean Saunders organised his defence, as the last three years are all in the top ten.

With a sound defence to build from, we naturally didn’t lose too often. 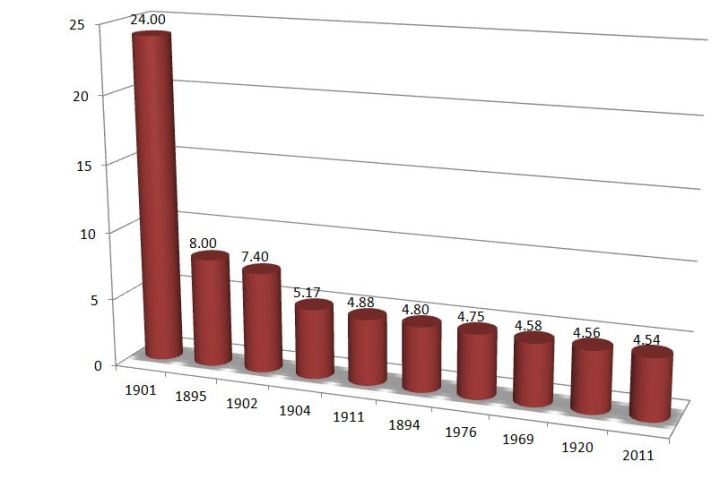 in terms of how often we lost (fig.4) this was the tenth

fig. 4 Most games per defeat in a calendar year

best season in our history. However, that statistic only tells half the story. Our two F.A. Trophy defeats against Salisbury and Hinckley saw us select reserve teams, while our loss to Airbus in the Welsh Cup was played on the same day as our F.A. Cup tie in Brentford, so we picked our youth teams. if you take those three games out of the equation, we lost every 5.6 games in 2011 in games which we took seriously, which would make this the fourth best season in terms of veing hard to beat in the club’s history, the best since 1902 and the best since we joined the Football League in 1921.

So clearly 2011 was a remarkable year for Wrexham F.C. Hopefully it was just an hors d’ouevre for an even better 2012!

2 thoughts on “Wrexham’s 2011 in Statistical Context”