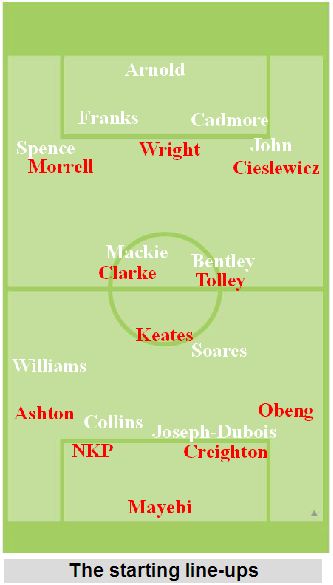 It’s hard not to warm to Hayes & Yeading. They play football the right way, passing and probing, on a part-time budget with miniscule crowds to fund their squad building, and they obliging roll over to let us tickle their tummies and take the points away when we venture onto their patch (or the patch they’re currently renting!)

Apologies for the patronising tone, and the gratuitous wisecrack at the end; the fact is that Hayes are an excellent example of how to survive on a small budget, but that admirable quality is also their weakness, as was illustrated in each of the three times we’ve gone south to face them.

In fact, this match was particularly similar to last season’s game at Hayes; uncannily so. Hayes played inventively, passed neatly and enjoyed a lot of possession, but conceded around the hour and never looked like coming back as we plundered them on the break to pick up a flattering scoreline.

The season before, in a meaningless game on the last day of the campaign, we’d also snatched a win despite losing the midfield battle for much of the match, on that occasion capitalising on another bizarre similarity with this match: back then young Tom Cadmore had enjoyed an excellent game at centre back, but inadvertently scored the only goal of the game he lunged to try to halt a Wes Baynes shot only to see it rebound onto him off the post and into the net; this time he again was rock-solid, apart from a crazy back pass under pressure which presented Mathias Pogba with the second goal.

But Hayes’ problem was one of a lack of creative quality. It’s easier to construct a long ball team on a small budget, so credit to Nas Bashir for continuing his predecessor Paul Haylock’s excellent work in trying to focus on the finer principals of the game. The problem is, it’s hard to lay your hands on the quality of player needed to play the passing game effectively without the money to tempt them in. Therefore, Hayes played nice football, patiently working the ball around in front of Wrexham’s defence, and certainly had the better of the possession stats in the first half, but lacked the player who could play the killer ball.

Furthermore, their strikers looked like the sort of forwards you get when you can’t afford to break the bank; Collins ran his heart out admirably but never threatened Mayebi’s goal, while Joseph-Dubois started very brightly, dropping off the front line to link play up brightly, but snatched horribly at the best chance Hayes created.

If that had gone in, after a quarter of an hour, things might have turned out very differently. Hayes had a fair measure of control in the first half as they married their ability to move the ball around the middle third with a level of organisation which a good coach can drill into even the most cheaply-assembled team. Wrexham struggled to establish any sort of passing rhythm as Hayes showed genuine discipline and stuck to a well conceived plan: it was striking how often the two strikers were allowed to press eagerly on the edge of Wrexham’s box, buying time for their midfield to drop in front of the back four when they didn’t have the ball. As a result Wrexham, lacking the playmaking talents of Lee Fowler and the swift feet and vision of Chris Maxwell, failed to pass the ball around at the back, and therefore were unable to draw Hayes out.

The result was that the strikers were completely starved of decent service. A series of hopeful long balls forward gave them little to work with, and they packed no threat apart from occasion surges from Adrian Cieslewicz. Indeed, Wrexham’s most potent attacking player was Curtis Obeng, who managed to break forwards eagerly; it was no coincidence that their two decent efforts resulted from passes to the forwards from the right back.

The problems lay in midfield, where the absence of both Lee Fowler and Jay Harris was keenly felt. Fowler’s passing ability would be a great loss to any team a division higher than this, and as we saw against Ebbsfleet, his invention will be missed against well-drilled opposition. To compensate, Dean Keates played in the anchor role, a position he has actually filled since Dean Saunders restored him to the side against Southport, but although he protected his defence well, he struggled to get his passing going on this occasion.

The issue wasn’t helped by his midfield partners: Jamie Tolley has qualities I admire, but piercing passing is not one of them, while Joe Clarke impressed as a neat continuity passer-indeed, he looked well suited on this evidence to play the Chris Blackburn role-but again, he wasn’t a penetrative or original user of possession.

Wrexham defended soundly, but their shape was leading to certain problems. It’s a recurring theme ever since Dean Saunders switched to a 4-3-3; the full-backs can be exposed against a 4-4-2 with no wide men to double up. To be fair, Cieslewicz showed considerable energy in the early stages to help Obeng out down the right, and the Hayes left winger Soares tended to drift inside anyway. However, on the other flank Neil Ashton found himself constantly exposed to the dangerously direct Williams, and although he battled away manfully, he couldn’t prevent crosses from coming in from that side of the pitch, particularly when Spence joined in on the overlap.

Having said that, Hayes weren’t creating chances; it was just that Wrexham didn’t look like threatening them either. The entire balance shifted just before the hour when Mathias Pogba was introduced. He immediately ran into the box and created a chance, flicking on an Obeng throw for Tolley, whose effort was blocked on the line. From the resulting corner his presence discomforted the Hayes defence, allowing the ball to roll through for Nat Knight-Percival to score, and a minute later Pogba had scored himself, after energetic pressing from him and Cieslewicz forced that fatal error from Cadmore.

From then on the game was irrevocably changed. Hayes simply didn’t have two goals in them, and carved out only one effort worth noting in the remainder of the game. For a five minute period after the two goals it looked like Wrexham would gorge themselves on the break, but they failed to take their chances and as the momentum faded from their breaks they contented themselves with closing the game out professionally. Ashton was afforded more cover and Williams faded out of the game, Hayes’ only likely outlet now becoming Soares, who drifted inside more and more, finding space in the hole. However, Wrexham’s rock-solid back four and a lack of quality in front of him meant Soares’ efforts were never likely to be rewarded. And therein lies Hayes’ problem; they’re fighting the good fight against the odds, but deserve plenty of credit for trying it.