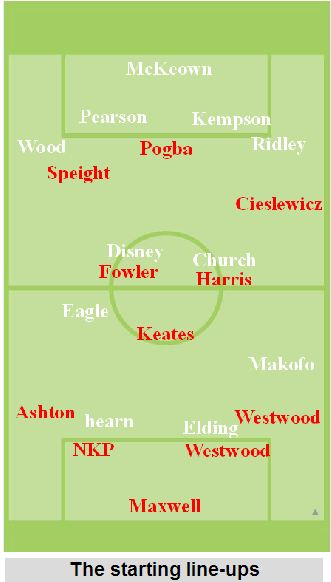 So Andy Morrell started his managerial career off with a great away win, but don’t expect any tactical innovations from him, at least not yet!

This victory was straight from the Dean Saunders manual, and Morrell admitted as much afterwards. How could it be otherwise when he had just one day to prepare his team after the job landed in his lap out of the blue? Indeed, the one change he made to the side Saunders had already laid out for the match was a personal one, as he dropped himself to the bench and gave Adrian Cieslewicz a first start to the season.

There were points in the first half when it looked like he might have made a mistake leaving himself out. That’s no criticism of Cieslewicz, but with the front three lacking quality service as the half wore on, Morrell’s ability to drop deep to find space might have offered a valuable link between Midfield and attack. However, the young Pole vindicated his new boss’ faith in him in the second half, not only by offering a regular outlet when Wrexham tried to bring the ball out of defence, but also by an excellent piece of play to tame a nasty pass from Mathias Pogba and thus keeping alive an excellent, patient move which would end in the decisive third goal.

The game started well for Morrell’s men as they pressed eagerly and worked the ball around confidently in the Grimsby half. With Dean Keates continuing to spend much of the time in the anchor role he played at Southport, Lee Fowler was released to play higher up the pitch than has been usual this season, leading to him being able to feed some excellent balls into the channels for Pogba and Jake Speight to run onto. This is one of Saunders’ last legacies to the club: while Fowler’s playmaking from deep has been Wrexham’s main tactical innovation this season, the disastrous defeat to York in what turned out to be Saunders’ last game as boss at The Racecourse showed the risk involved in this tactic. Fowler is a far superior footballer to his predecessor in the role, Chris Blackburn, but he lacks his tactical discipline and Patrick McLaughlin was able to profit in the spaces he left on the edge of the area. With Keates back in the starting line-up at Southport, Saunders decided to allow Fowler more scope to move up the pitch, and he exploited it at Grimsby, his excellent goal the perfect illustration of what he can do when released higher up.  Alongside him the remarkably energetic Jay Harris gave a typically feisty performance, and Wrexham certainly dominated midfield in the second half.

Before we get too carried away with a good second half performance, the first half was a very different affair. The opening quarter of an hour went according to plan, and Pogba’s goal was fair reward for Wrexham’s composed style of play and command of the middle of the pitch. However, Grimsby are a very big, direct team, and as often happens when there’s a clash of styles between two teams, it became a battle to see which type of football would impose itself. For the last half hour of the first half the game was emphatically played on Grimsby’s terms.

They were aided in their endeavours by the absence of the suspended Curtis Obeng. Chris Westwood, making his five hundredth career appearance filling in at right back, had an extremely unhappy afternoon, offering left winger Serge Makofo the chance to be a threatening outlet. Fortunately for Wrexham, the Congolese winger has more in common with Pogba than just geography; his erratic input into the match faded as the game went on, and although he beat Westwood at will, there was very little end product and he was withdrawn in the second half.

Wrexham’s enforced change at right back also had an effect in the opposing half, which ironically showed that Morrell was right afterwards to speak of the well-drilled unit Saunders had inherited, as players played passes to where they anticipated the absent Obeng would be, rather like a cat with an amputated limb trying to scratch itself with its stump. Harris in particular likes to open up play to the overlapping Obeng, while Fowler and Keates are also adept at opening up their bodies from deeper to play the long diagonal to him, but attacks often ground to a halt when the trio instinctively tried to switch to the right, only to find that either Westwood’s comparative lack of pace meant he wasn’t where they’d expect Obeng to be, or a poor touch meant the ball went out of play.

Westwood’s problems were obviously exacerbated by the lack of cover in front of the full back which Saunders’ progressive interpretation of 4-3-3 offers, with the front three encouraged to stay up front as much as possible when not in possession. Morrell stuck rigidly to that pattern, eschewing the option of switching to 4-4-2 which Saunders has often fallen back on this season, and ultimately he was proven right and rewarded for his boldness. However, as the first half wore on there was a worrying sense that the strikers, isolated with decent service a rarity, were peripheral and Grimsby might run away with the game.

That they didn’t was down to some excellent work from Mark Creighton, Nat Knight-Percival and Neil Ashton. They dealt with the aerial bombardment well, and didn’t particularly look like they’d be breached in general open play, except for the goal,which came when the midfield failed to deal with a routine long ball to the edge of the area. Despite that, the more regular sources of danger were  set pieces and breakaways.

Grimsby possessed a significant height advantage at restarts, and although Chris Maxwell took responsibility and looked to attack the high balls, there was such a crowd of big bodies to get through that he struggled to get distance on his punches and a swift delivery of the second ball into the box was always a danger. Meanwhile, on the break The Mariners offered a genuine threat. With Anthony Elding a willing target man, albeit an unpopular one with his own fans, and Liam Hearn running the right channel with terrific energy, Wrexham were often caught out by swift breaks, and had to thank Maxwell for a couple of smart saves.

Wrexham got into half time relived to have survived, although to be fair they’d enjoyed some breaks of their own and in an entertainingly open match had often looked like they might strike themselves. However, that threat was limited to breakaways,and in general they had looked to launch long balls to the strikers too often, thus surrendering possession easily. Pogba is no Danny Wright in the air, and Darran Kempson was therefore able to head long balls clear with impunity

They imposed themselves more successfully in the second period, Makofo faded and the influence of Town skipper Craig Disley in the heart of the pitch also lessened , Adrian Cielsewicz was starting to drop deep, offering a bit fo depth to the attack and proving a useful outlet when Wrexham sought to change from defence to attack.

Harris’ fine goal was a bolt out of the blue which suddenly tipped an even second half in Wrexham’s favour, and when Disley missed two good chances in succession soon afterwards you began to think it was Morrell’s day. Having impressed upon his team the need to get the ball down and impose themselves again, he must have revelled in an even better third goal, when a lengthy, patient, probing move which switched play from flank-to-flank three times ended in Fowler bursting through the middle, exchanged one-twos with both Keates and Jake Speight, before finishing well.

The game was killed off by the goal and Morrell had his first victory as manager; we didn’t get too many clues as to what sort of coach he might become, but he has clearly absorbed one very sound piece of common sense; if it ain’t broke, don’t fix it!