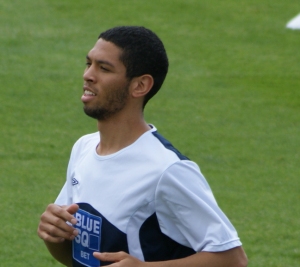 It was such a relief to be sitting at The Racecourse last Saturday watching a game and providing the commentary for hospital radio and Wrexham player alongside the legend that is Mark Griffiths or Griff 92 as he is more commonly known!!

With the off field drama put to one side for a couple of hours we could focus on the action and to be honest it was a nervous and stuttering start from Saunders men. They played well in parts but on occasions looked disjointed and out of sorts against a lively looking Cambridge United outfit. Andy Morrell took his goal well whilst our man of the match Nat Knight- Percival was so unlucky deep in to injury time to deflect a weak shot past Maxi to give the visitors a point which in all fairness they deserved.

On to Bath City and despite being delayed on the M5 and getting to the ground just over an hour before kick off it was a professional performance from the Reds with two goal Andy Morrell (or Christina Aquilera as Deano now calls him!) in a rich vein of goalscoring form clinching the first away win of the term. So despite the pre season upheaval Wrexham have made their best ever start to a Conference season with 4 points from their first two games and there are promising signs for the long season ahead.

The spine of the team looked strong on Tuesday, starting with a confident Chris Maxwell in goal, through Mark Creighton and NKP in central defence, Lee Fowler in midfield and Danny Wright and Jake Speight up front the lads looked to be forming good partnerships. Bearing in mind skipper Dean Keates and experienced centre back Chris Westwood have yet to appear in the squad, even though Keates shirt has, perhaps the Reds have more depth in the squad than I first thought. Certainly in midfield and up front where the impact substitutes Cieslewicz and Pogba changed the game on Tuesday Dean has plenty of options, the goalkeeping position does concern me however as I am not convinced Mayebi will be consistent enough if Maxi was injured or leaves the club. With NKP performing so well at centre back and Chris Blackburn also able to cover there if necessary Dean does have defensive options but perhaps he would like another experienced centre back rather than rely on the promising but still young Johnny Hunt, Declan Walker and Steve Tomassen.

All in all I’m happy with the start we have made and judging from the ebullient manager in the post match press conference on Tuesday night so is Dean Saunders. It’s on to Lincoln tomorrow night (Friday) and here’s hoping the lads can extend their unbeaten start to the season.