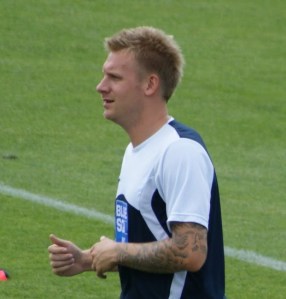 Have you noticed how unsung heroes don’t get much credit for what they do? Ain’t that something? Well, let me point you in the direction of someone who deserves a bit more credit than he perhaps gets.

I’m impressed with Jamie Tolley. I think he was an astute signing by Saunders, although at the time I must admit that I had my doubts.

The circumstances weren’t terribly auspicious. He arrived on trial in the Summer, didn’t look particularly fit, and after scoring a superb goal in our first pre-season friendly, at Vauxhall Motors, didn’t really catch the eye again.

However, he was given a contract, and I worried that Saunders might be falling into a familiar trap; one which has made a habit of catching a succession of Wrexham managers out in recent years. Basically, what happens is you see a player with a bit of quality, whose pedigree suggests he should be playing at a higher level, and you ignore the fact that he isn’t fit, blinded by the prospect of what he’ll be like when he actually does return to his best. The problem is, of course, that they rarely do rediscover their mojo. There might be the odd exception, I suppose, but there are many moregambles like that which don’t come off. Juan Ugarte anyone?

I was therefore rather bothered that Tolley might fit into this category. He looked a bit laboured in the middle of the pitch as he looked to get his condition back, and that great strike which was burned in all our minds was beginning to look a little bit like a fluke.

However, as he started getting games under his belt, he showed us a few things. Firstly, that goal wasn’t a one-off. He has chipped in with goals from midfield, including a screamer against Southport, and looks to have the technique to trouble goalkeepers from distance.

More encouraging though, is his ability to run beyond the strikers and get into goalscoring positions. He gets into the box well, and you suspect there are more goals in him as the season progresses. In that respect he reminds me of players like Terry McDermott or John Wark (showing my age here!), who often would be fairly peripheral in general play, but would consistently pop up in scoring positions.

Perhaps more crucially though, the amount of ground he covers in getting up and down the pitch these days shows that he has worked hard to attain peak fitness, and you certainly couldn’t fault his attitude as you might some players who’ve arrived in similar circumstances. (I can’t imagine why, but the words “Lamine Sakho” just drifted into my mind! Tolley’s scored five times more goals than he ever got in a Wrexham shirt already despite the fact that he plays in a deeper position!)

Furthermore, I think Tolley does an important job when we haven’t got the ball. Quite apart from his height, which is a useful asset in a physical league, we’ve shown an impressive ability to keep our defensive shape when we haven’t got the ball, and Tolley has often been part of our most determined rearguard action. He reminds me of what people used to say about Mel Sutton in that respect; he does a lot of the dirty work that people often don’t see, but team mates and managers appreciate.

The value his team mates put on him shouldn’t be under-estimated either. I get the impression he’s a genuine changing room character.

Now you might read all this and wonder why I’m praising someone who isn’t holding down a place in the first team. Fair enough, but I think that’s the main reason why I’m positive about him. We’ve seen already this season that Saunders has compiled a decent starting eleven, capable of sustaining a position near the top of the table. Now we’re seeing that he also has a good squad; there are back-up players at his disposal who, when injuries, suspension or loss of form kick in, are more than capable of stepping up to the play.

Teams like AFC Wimbledon are flying high, but they know their squads are thin and a congested fixture list could hurt them. whereas the cover we’ve got in most positions means we probably don’t have to fear that eventuality quite as much. The sound recruitment Saunders carried out in the Summer is now bearing fruit.

One thought on “Good Tolley”