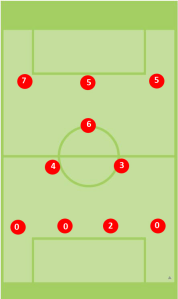 Last season we couldn’t score for the life of us. Now we’re hitting the net regularly enough: the Altrincham game was only the second away game this season in which we didn’t score. The problem is that, while we’re getting goals from midfield now-something which simply wasn’t happening last season-we don’t have a striker leading the way and getting into double figures.

That fact is illustrated by the graphic to the left. It shows where each goal has come from this season. As you can see, we’re getting plenty from the middle of the pitch. Indeed, the thirteen goals we’ve had from midfield so far is a vast improvement on last season, when we managed just five goals in the whole campaign from the centre of midfield.

Mind you, we might want to look at our effectiveness from set pieces. We got seven goals from our defenders last season, but this time round we only have two strikes from Marvin Andrews to show despite the fact that we’ve got more height to throw forward for dead ball plays now.

Still, the main issue is up front. We need someone to hit the net more regularly. If we can find a player capable of doing that, and keep the goals coming from midfield, our play-off hopes would rise dramatically.