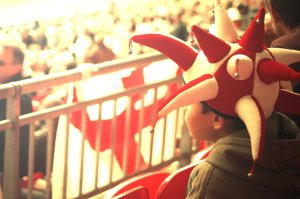 Well, having got myself excited earlier this season about the thought of Wrexham getting to Wembley in the F.A. Trophy, I wasn’t about to deny myself the experience, so my lad and I went to Wembley yesterday to see what we missed out on. And we missed out on something great!
The F.A. Trophy Final. the non-league showpiece, is a real day out for both sides and anyone else who has more than a passing acquaintance with them-how else can you explain 27,000 fans turning out to watch two sides whose combined attendance is more like 4,000?
It also accounted for the high volume of day-trippers in the crowd and, without wanting to sound like I’m being critical because the atmosphere was fantastic, there was a sense of being in the midst of people enjoying a good day out as much as the football-the sense of tension was diluted and at one point my view of a dangerous cross into the goalmouth was obscured by the man in front of me jumping up to wave to a friend who’d just phoned him!
But it would be churlish to focus on that. The atmosphere was great, the game entertaining, and the York Ultras made it feel like an occasion, setting smoke bombs off and admirably still jumping around behind the goal immediately after Stevenage had opened the scoring.
Of course, of particular interest to me was the large contingent of York players with links to Wrexham. There was no sign of Christian Smith, Adam Smith or Simon Brown, but three familiar faces were in the starting eleven.
Mike Ingham, in goal, had a solid game, making one particularly sharp save and having no chance with either of Borough’s goals while Levi Mackin worked hard and economically in midfield, not managing to turn the game in City’s favour but looking tidy enough. The star performance came from Pejic though.
When I saw he was starting at left back I assumed it was yet another example of Martin Foyle’s genius! However, he looked rather good. He got forward well-in fact he was unlucky to put a twenty-five yarder wide on one of his surprisingly confident forays forward on his wrong flank and linked well with Adam Boyes, York’s impressive 18-year-old prodigy who has spent part of this season on trial at Old Trafford.
Furthermore, defensively he did well, making a crucial clearance off the line and meeting plenty of crosses into the York area. You know what I’m going to say next-are all the defenders we’r

e left with at the moment better than Pej?
The over-riding feeling was that I’d had a great day out at Wembley-next season I want another one, with Wrexham!